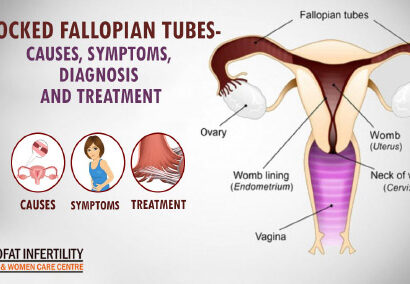 Dr. Abayomi Ajayi is Medical Director, Nordica Fertility Centre. In a recent chat with PunchHealthWise, the IVF specialist delivers a message of hope to women with blocked or damaged fallopian tubes.

Naturally, your tubes are vital to you getting pregnant.

They transport the eggs until fertilisation by sperms takes place and the resulting embryos are nurtured as they move through the length of the tube to the uterus over five days. To function as an incubator where the egg and sperm meet and the initial stages of embryo development takes place, your tubes must be open.

The inside lining of the Fallopian tubes must act as a conveyor system, moving the developing embryo to the uterus where it implants 3 to 5 days after ovulation.

If your Fallopian tubes are damaged or blocked, this is known as tubal factor infertility. The egg and the sperm are prevented from interacting, and the proper movement of embryos along the tube to the uterus is obstructed, preventing a pregnancy.

Next is to understand how Fallopian tubes can be damaged or blocked. The tubes are delicate structures, and can easily become blocked or damaged, reducing the chances of the sperm reaching the egg, proper embryo development and implantation in the uterus.

READ ALSO: Women Issue: Gynecologist, Dr. Alex Okeke Takes Us Through The Causes Of Blocked Fallopian Tubes And Its Effect On Fertility

Your tubes may be blocked as a result of scarring from infection or previous abdominal or pelvic surgery. However, one of the main causes of tubal infertility is pelvic inflammatory disease (PID), which is also associated with an increased risk of subsequent ectopic pregnancy (when the fertilised egg implants in the Fallopian tube instead of the uterus).

If you are a long-term user of the intra-uterine contraceptive device or IUD, you could also be at risk of tubal damage, especially when you have more than one sexual partner. Other possible causes include endometriosis and sexually transmittable disease such as gonorrhea and chlamydia.

Your Fallopian tubes connect your ovaries to your uterus where the fertilised egg develops into a baby. Fertilisation normally takes place in the Fallopian tube and in the event of blockage or damage, this can stop a woman from getting pregnant and increases the risk of becoming pregnant in the Fallopian tube, commonly called “tubal” or “ectopic” pregnancy. Surgery may be performed to open or repair the blocked or damaged tube(s).

Tubal damage can also be caused by the rupture (bursting) of the appendix. Any surgery in the abdomen or pelvis can also cause scar tissue, including common surgeries like removing fibroid or operations for ovarian cysts.

Endometriosis is a common gynecologic condition that can be associated with damage to your tubes. Women who have pelvic pain, pain during sex or painful periods, and are also having trouble getting pregnant may be at risk of endometriosis.

Success of surgery on tubes depends on where the tube is blocked and how severe the damage is. Different surgical techniques are used depending on the location of the tubal blockage. The goal of surgery is to open the tubal passage if possible by either removing scar tissue, creating a new opening in the outside of the tube or opening up the tube from the inside.

If the blockage is at the end of your tube closest to an ovary, surgery is performed either with laparoscopy (through a telescope placed through a tiny incision through your belly button) or laparotomy (traditional open surgery).

Will you be able to get pregnant? This is the million-dollar question. Your chance of becoming pregnant after tubal surgery depends on three factors. These are the amount of damage to your tubes, the health of your partner’s sperm, and your age.

SEE ALSO: Will Lying Down After Sex Increase Your Chances Of Getting Pregnant?

If your tubes are badly damaged as it commonly occurs when the cause is infective or remain blocked even after surgery, you may be able to get pregnant through in-vitro fertilisation (IVF). IVF is the most effective and successful modality for treating blocked Fallopian tubes.

In IVF treatment, eggs and sperm are collected and joined outside the body in a laboratory. After 3-5 days, the healthiest fertilised eggs, now called embryos, are placed into your womb, where they can grow into a pregnancy. If the sperm count is low, going straight to IVF may be recommended because this treats both tubal disease and low sperm counts.

Irrespective of what you might have heard, the biggest risk after tubal surgery is the possibility of a tubal pregnancy. It is important after tubal surgery to see a healthcare provider as soon as you think you are pregnant or have missed your period in order to be evaluated and treated for an ectopic pregnancy before it causes serious complications.

If you observe irregular vaginal bleeding and lower abdominal pain, these are common symptoms associated with tubal pregnancy, particularly at later stages. Other risks related to surgery for blocked tubes are the same as with any surgery.

A qualified fertility specialist will be able to determine if your Fallopian tubes are blocked or damaged, using a pelvic x-ray called a hysterosalpingogram (HSG).

The test involves the injection of dye into the uterine cavity and a simultaneous x-ray of the uterus and tubes, allowing the specialist to see any damage or blockage.

It may be that the flexibility of the tube is reduced, so it can’t pick up the egg when it is released from the ovary. There may be a total blockage preventing the sperm and egg from meeting and producing an embryo. It could also be that there is damage to the inside wall of the tube, which prevents the embryo from moving down to the uterus. This could result in an ectopic pregnancy.

Whether surgery or IVF treatment is the right option for you, getting pregnant with blocked Fallopian tubes is possible. It begins with understanding the process – why your Fallopian tubes are damaged or blocked, to how they can be fixed towards getting you pregnant.