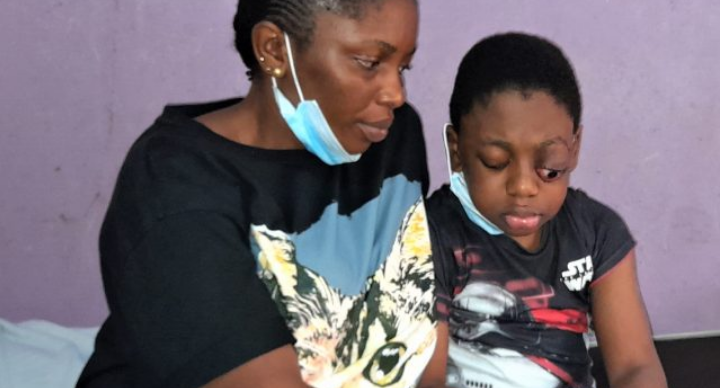 Childhood cancer is stealthily stealing the country’s young. Despite the ravages of this non-communicable disease and the toxic effects of the treatment regimen, their chances of survival remain slim.

Their predicament is made worse by the high cost of treatment and inadequate facilities for cancer management,  Tessy Igomu of Punch reports.

He shares the story of 8-year-old Nathaniel whom he encountered at the pediatric oncology ward of LUTH. With a pale appearance and left eyeball grossly engorged, Tessy shared that Nathaniel gradually slipped back to consciousness after undergoing a medical procedure at the Teaching Hospital in Idi Araba. Sleepily, he touched his lower back, covered by surgical plaster and winced.

Nathaniel had just undergone a medical procedure that required a specimen to be taken from his spinal cord for a test.

READ ALSO: How To Identify And Prevent Childhood Cancers

As he sat upon a bed inside LUTH, Dupe, his mother, helped him into a comfortable sitting position, and gently wiped off tears and whitish discharge from the affected eye. Nathaniel is eight, but his young body has endured so much pain and discomfort in two years.

He was diagnosed with cancer (orbital myeloid sarcoma), in 2018 at Queen’s Hospital, the United Kingdom, after several biopsies carried out in Nigeria failed to give an accurate diagnosis.

His father, Ebisidor Nabena, told PUNCH Healthwise that the disease has infiltrated his orbital soft tissue.

“We were told that if the growth is not promptly operated, it could lead to acute myeloid leukaemia, an advanced dangerous state,”

Nathaniel’s ailment had begun with slight swelling, but in no time, the eyeball started gorging out of its socket.

He was initially taken for treatment at the Eye Foundation Hospital in Ikeja and later referred to the Lagos State University Teaching Hospital, Ikeja, for further management.

“It was Queen’s Hospital, United Kingdom, that gave us an accurate diagnosis. The tissue was couriered there,”

Nathaniel has not been able to undergo surgery or radiation at LASUTH, because doctors discovered the tumour was close to his optic nerve and brain.

His father said despite several hospital visits, months of admission and treatments, the disease still relapses. He decried the high cost of managing the ailment, noting that it has eaten deep into the family’s purse.

“The doctor said it was risky to carry out radiation and referred him to the Oncology Department for chemotherapy.

“When it comes to the health and life of your child, money spent becomes immaterial. But it has really cost us a fortune.

“I have spent not less than N10 million. His stay in the hospital usually lasts between two to three months.

“To carry out periodic Magnetic resonance imaging (MRI) costs N80, 000, while full blood count, which is done every other day, is N2, 000.

“Chemotherapy drugs are not cheap. The one he is to take now for maintenance costs N295, 000, per vial and he needs five of it for three days.

Nathaniel’s case is an insight into how many Nigerian families struggle not to lose their children to cancer. At the LUTH paediatric cancer ward, where our correspondent met with the boy, there were several children with other forms of cancer, and who are expected to have a better outcome based on supportive treatment.

However, the demeanour of their parents painted a picture of being trapped between hopelessness and helplessness. According to Nathaniel’s father, it is more of a hopeless situation as he had lost count of the children that succumbed to the disease due to complications from chemotherapy, late presentation, or lack of money to pay for out of pocket treatment.

The burden of cancer in Nigeria

According to the World Health Organisation, cancer is a name used to classify a very wide range of diseases in which cells in the body lose their normal structure or function and begin to grow uncontrollably.

It notes that cancer is a leading cause of death for children and adolescents worldwide and that globally, 160,000 new cases of cancer and 90,000 deaths are recorded annually for children under the age of 15.

WHO estimates that up to 30,000 children are diagnosed with cancer yearly; and 80 per cent of them live in low and middle-income countries like Nigeria.

Findings from a retrospective study of cancer cases in children aged 0-18 years, at the Paediatric Haemato-oncology Unit, University of Uyo Teaching Hospital, Akwa Ibom State, over an eight-year period, showed that childhood cancers are now recognised as a growing global challenge, especially in resource-poor settings.