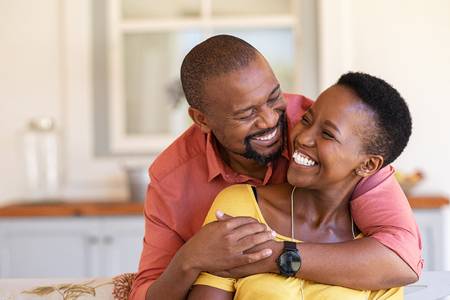 There’s a difference between putting your foot in your mouth and pulling the pin on a hand grenade that can completely blow up your relationship. This is an important distinction to understand: Happy couples fight because of course they do. But they learn what they shouldn’t say in the heat of the moment.

Out of respect, they understand what lines shouldn’t be crossed. “Over time, partners learn about what to say that is acceptable and unacceptable, as well as where the line exists between the two,” says Andrew Aaron, LICSW, a marriage counselor, sex therapist and relationship therapist.

He says that successful couples draw a strong line that they refuse to cross regarding respect, and that they will not act or talk disrespectfully to each other.

“But for couples who have not been able to maintain their happiness, perhaps because mutual hurtfulness has eroded their goodwill or sufficient resentment has accumulated, they act from their pain with an intent to hurt the other.”

In any relationship, there are lines drawn that should not be crossed. Those in committed, happy relationships understand this. But, as a refresher course is always helpful, YahooLifestyle consulted with a variety of relationship experts to get a sense of the phrases that couples in happy relationships should never pull out in a marriage.

“I never should have married you.”

This is the kind of statement that can ruin a relationship in an instant. The suggestion that there is, or was, a better option out there will throw your partner into self-doubt and deeply wound their sense of character and self esteem.

This is a tough one to come back from, so think about what might make you say something like this and deal with it before those words ever come out.

“The statement has so much depth and if you haven’t discussed the underlying issues that made you even think, it means that you might be ignoring or rationalising red flags in the relationship,” says Fuller.

“If there aren’t unresolvable issues in your relationship never say this because it hurts and it’s tough to repair the type of emotional pain that it causes.”

This is a belittling phrase, but it also operates on the assumption that you are in the right and your partner is wrong, adding an element of invalidation as well. In short, assumes that however they are feeling is childish or wrong. A big mistake.

“This will weaken your partners’ self-esteem,” says Shar Fuller, Relationship Expert & Co-Founder of the matchmaking service Mai Tai, “and if your ratio of positive and kind behaviors to negative interactions is out of kilter —five-to-one balance is what you’re aiming for — you won’t have a positive balance on your emotional bank account.”

“This is your fault.”

Whenever something goes wrong, there’s a natural instinct to try and figure out what happened and why. This tends to lead to the assignation of blame, and most people’s first instinct is not to point the finger at themselves. However, if you start laying it all at your partner’s feet, then all you are doing is fostering resentment and anger.

“Accusatory language makes us emotive and the logical explanation that you’re seeking will not suffice,” says Fuller. “Avoid shifting blame or making conclusions based on your limited experience to prevent a buildup of resentment.”

Phrases like this tend to come out of a buildup of pain and bitterness that has accumulated over time. If you do not address the root of these emotions, they will come out in these contemptuous attacks.

“Unresolved, pain will run the relationship and these phrases are simply symptoms of internalized pain and anger,” says Aaron.

“For some partners of troubled relationships, what they say may be a carry-over from the culture of their family of origin or injuries caused in prior relationships. The internalized pain of partners has not always been accumulated from within the present relationship.”

If this phrase, or any other such sarcastic volley, comes to mind, pause a second and examine it. Maybe your relationship is one where sarcasm is a second language. But how is this in any way a positive? Even if you think the second part of the phrase is endearing, all your partner will hear is “You’re a loser.”

This isn’t a playful dig; it’s a hurtful, character-assassinating remark that has its roots in resentment. “Sarcasm is a manner of speaking in which anger-based expressions are veiled with humor,” Aaron explains, “so that the recipient has difficulty ascertaining the true intentions of the speaker and therefore less confident in a defensive reaction.”“I wish I never listened to you.”

Everyone makes mistakes. Everyone makes poor choices. But it’s important not to castigate your partner when a decision leads to an unfortunate outcome. At the end of the day, you both made the decision jointly, even if your partner may have persuaded you.

By saying this, you are invalidating them and making them feel worthless and as though their thoughts and ideas are not worth considering.

“We all want to know that every single part of us including our ideas are loved and valued,” says Fuller. “This is another character assassination which seems harmless but actually end up making your partner defensive and less open to discussing new ideas and opportunities.”

This one is doubly insulting because it not only degrades your partner, but it also takes a swing at a close relative. It’s a low blow to dig into the character or negative attributes of someone’s family and weaponize those attributes against your partner.

Getting to know your partner’s family means you’ve been welcomed into his or her circle. “Don’t abuse the trust that you’ve built up,” says Fuller. Show your partner that you respect them and their family by removing this from your vocab.

Ultimatums do not work in a relationship ever, especially when they come packaged with threats of abandonment. Throwing around threats like this make it look like your feelings for your partner are either disposable or not real at all.

If your spouse feels like they’re one mistake or one refusal to comply away from losing you, how can they feel secure in the relationship?

“This sort of comment can have a lasting effect on your relationship because even if you don’t finish it you’ve already implied that they are not important in your life anymore,” Fuller says.

“This weakens the long-term emotional bond and is a minus two for that emotional bank account each time you say it. I hope you get the picture because it’s pretty bleak.”

“I’m sorry that I’m not good enough for you”

Confidence is key in a relationship, and this display of a lack of confidence will lead to frustration. It also suggests an inflexibility or an unwillingness to change.

“This is how I am, so if that’s not good enough for you, then I can’t help you.” From a place like that, there is almost nowhere to go.

“This sort of an argument is the low part of the emotional rollercoaster that you’re both on,” Fuller says, “and the request for a sympathy vote will just dissipate because your partner may think that you’ve got a lot of self-development to do but seem unwilling to start. It doesn’t work because it’s not a constructive argument and there is little opportunity for building a stronger relationship.”