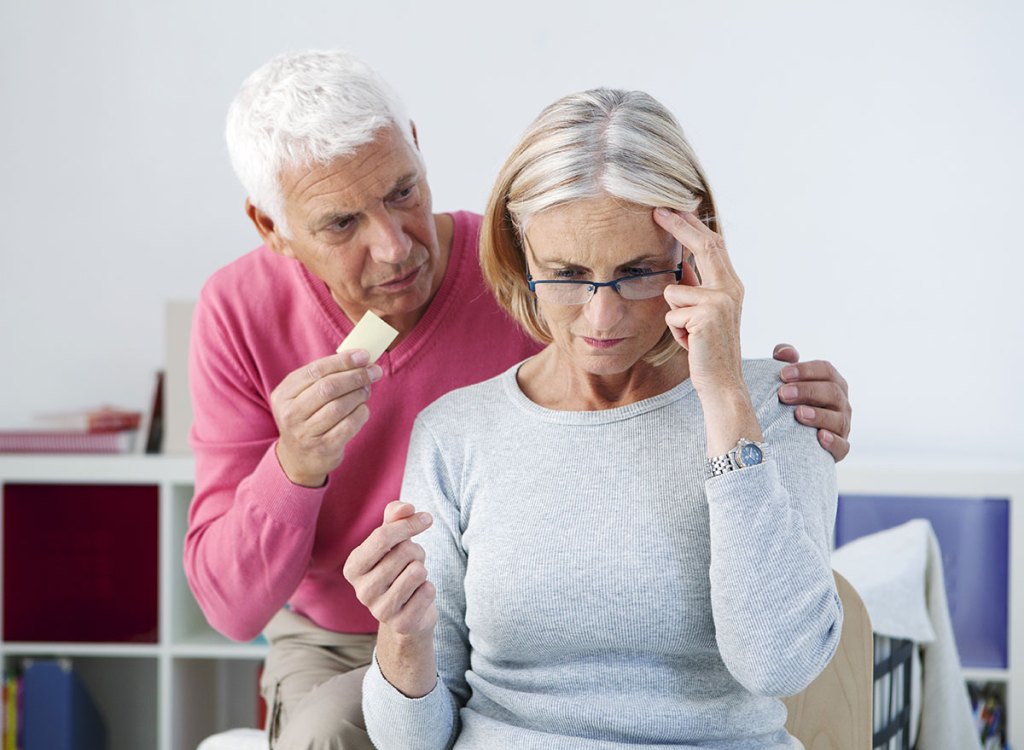 You probably already know that exercising is necessary to preserve muscle strength, keep your heart strong, maintain a healthy body weight, and stave off chronic diseases such as diabetes.

Not exercising, or even not getting physical activity, is a confirmed risk factor of premature death. In fact, inactivity and being sedentary causes more deaths around the world than cigarette smoking or diabetes, according to a study published in The Lancet.

Researchers found that people who were the least fit (as determined by a treadmill test) were at a 500% increased risk of dying early.

P.S. “Exercising” doesn’t have to be as serious as running or hitting the gym. It can be as simple as walking.

Here are some other dangerous side effects of not exercising that may motivate you to get off the couch and break a sweat.

N.B: When you do start exercising, make sure you’re supplementing your diet with the right foods —like smoothies.

1. You may find it hard to get a good night’s sleep.

Not getting enough sleep or tossing and turning at night may not seems like something to worry about. But if it happens regularly, it can usher in a host of health problems—from weight gain and diabetes, heart disease to poor immunity to mood disorders and even accidents.

So, poor sleep due to lack of physical activity can be life-threatening. Now, consider the flip side: Have you ever fallen into the deepest, most satisfying and rejuvenating of sleeps after spending three hours in the fresh air working in the yard, paddling a kayak, backpacking 10 miles, or running a long-distance race?

Vigorous exercise, especially when done outdoors, is a highly effective drug-free sleep inducer—one that you’re missing if you aren’t getting regular exercise. A meta-analysis of research exploring the interrelationship between sleep and exercise in the journal Advances in Preventive Medicine identified 29 studies showing that exercise improved both sleep duration and sleep quality.

2. You may develop high blood pressure.

Exercise helps your heart pump more efficiently. If your heart is fit, it has to work less hard to pump blood, and the force through your arteries decreases. If you don’t exercise, over time your cardio-respiratory fitness (CRF) decreases.

Many studies have demonstrated this: In one South Korean study published in the American Journal of Human Biology, 3,831 men without heart disease or hypertension were given two health examinations about 10 years apart.

The researchers found that subjects whose fitness levels decreased over that time period had a 72% increase risk in developing high blood pressure compared to subjects who increased their cardio-respiratory fitness. So count not exercising as one of the 14 Mistakes That Are Making Your High Blood Pressure Worse.

SEE ALSO: How Moderate But Regular Exercise Can Literally Change Your Life

Even when you have none of the classic risk factors for heart disease—like high blood pressure, high cholesterol, and obesity—inactivity can still lead to heart disease, a condition that affects up to 6 million Americans.

Johns Hopkins Medicine researchers analyzed reported exercise levels in more than 11,000 people participating in the Atherosclerosis Risk in Communities study and found that going without physical activity in middle age for six years was linked with an increased risk for heart failure.

The 2,530 participants who reported decreased physical activity increased their heart failure risk by 18% even though they had no history of cardiovascular disease at the start of the study, the report in Circulation showed.

4. Your memory may fail more easily.

Studies have demonstrated that one of the areas of such growth is in the hippocampus, which governs memory and executive functions. One study presented in the journal Neurology found that people who were fit as young adults had a better memory, motor skills, and a greater ability to focus and control emotions 25 years later when they were in middle-age.

Top-level kayakers are a pretty fit bunch, wouldn’t you say? So, consider this experiment that measured their VO2 max after taking a five-week break from their training. VO2 max is a measure of the maximum amount of oxygen a person can use during a bout of intense exercise, and it’s considered the gold standard test for determining an athlete’s cardiovascular fitness.

The Journal of Sports Science & Medicine study found that the athletes’ VO2 max dropped an average of 11.3% during the five-week hiatus from kayak training. That’s significant. Now consider how bad your VO2 max might be if you, a mere mortal not an elite kayaker, didn’t do any exercise at all for a long period of time.

6. Your blood sugar will get out of control.

Physical activity plays such a critical role in how your body processes carbohydrates that even missing a few workouts can impair control of blood sugar levels, according to recent research in the journal Medicine & Science in Sports & Exercise.

“We now have evidence that physical activity is an important part of the daily maintenance of glucose levels,” said study author John Thyfault, an assistant professor in the Department of Nutrition and Exercise Physiology at the University of Missouri.

“Even in the short term, reducing daily activity and ceasing regular exercises causes acute changes in the body associated with diabetes that can occur before weight gain and the development of obesity.”

More and more research suggests that you don’t have to become an athlete to reap the benefits of exercise. A breakthrough 2013 study published in the journal Arteriosclerosis, Thrombosis, and Vascular Biology comparing moderate walking to vigorous running found that both forms of exercise produced similar reductions in risk of type 2 diabetes.

7. You may increase your risk for certain cancers.

Does sitting all day increase your risk of getting cancer? Scientists don’t know. What they do know is that sedentary behavior is a risk factor for many chronic conditions and premature death.

While no studies have proven lack of exercise causes cancer, many self-reported observational studies have provided evidence linking higher physical activity to lower cancer risk, according to the National Cancer Institute.

For example, a 2016 review of 126 studies found that people who engaged in the highest level of physical activity had a 19% lower risk of colon cancer compared to those who were the least physically active. Similarly, a meta-analysis of breast cancer studies showed that women who exercised the most had a 12% to 21% lower risk of developing breast cancer.

8. Your knees and shoulders may hurt

Aches, pains, and throbbing joints can be caused by osteoarthritis, injury, repetitive motions at work, and aging, but inactivity is also a common trigger of joint pain.

“Limiting your movements can weaken muscles, compounding joint trouble, and affect your posture, setting off a cascade of further problems,” write researchers at Harvard Medical School in HEALTHBeat.

The fix is simple but doesn’t happen overnight. Begin a regular routine of walking and other aerobic exercises, and resistance training to strengthen key supporting muscles and restore joint flexibility.

9. Your HDL “good” cholesterol will go down.

Getting regular aerobic exercise is one of the most effective ways to raise high-density lipoprotein (HDL) cholesterol, which is called the “good” cholesterol.

HDL cholesterol it helps remove harmful cholesterol from your bloodstream and is associated with a lower risk of heart disease, according to Harvard Health Letter. So, if you’re not exercising regularly and doing it with enough intensity to increase your heart rate, your HDL will likely go down and the LDL (bad) cholesterol will increase.

“If you break that down, it ends up being a half an hour five days a week, approximately,” says Haitham Ahmed, MD, MPH, a preventive cardiologist in New York City.

“Those activities are enough to get your heart rate up, and you breathing hard. That’s generally good for your HDL cholesterol, as well as the LDL, and the triglycerides.”

Supplement that with a healthy diet that includes these 20 Foods That Raise Your ‘Good’ Cholesterol and you’ll be giving your heart a break.

10. Your bones may become brittle.

As you get older, calcium from your bones is reabsorbed into your bloodstream. This results in a reduction in bone mass and can lead to brittle bones, a condition known as osteoporosis. One of the key ways to prevent this bone loss is exercising. If you’re not getting much, you increase your risk for age-related bone weakness.

The American College of Sports Medicine recommends weight-bearing exercises that involve jumping (like tennis and basketball) and running. Resistance training with weights is also recommended to increase bone density by the National Strength and Conditioning Association.

11. You may become depressed.

It’s a chicken or egg conundrum: Does physical inactivity trigger depression or does depression cause us to retreat into sedentary behavior? Clinical research has supported the latter theory: depression leads to decreased activity of any sort, including the desire to exercise.

In fact, some studies suggest that inactivity may even be an evolutionary survival strategy—we slow down to become less conspicuous and avoid conflict.

Meanwhile, exercise is a well-established drug-free treatment for anxiety disorders and depression. But can inactivity—without depressive symptoms—put one at greater risk for developing symptoms of depression?

An analysis of dozens of observational and intervention studies suggests that physical activity could prevent depression. While some of those studies showed that low- and high-intensity physical activity were both effective at reducing the likelihood of depression, a number of studies found that vigorous exercise had the greatest preventive effect.

Most experts agree that your eating habits play a greater role in weight gain or loss than the amount of exercise you do. However, considerable research has shown a correlation between obesity and a sedentary lifestyle.

One such study by Stanford University researchers published in The American Journal of Medicine looked at long-term results from more than 17,000 participants in the National Health and Nutrition Examination Survey.

During that same period, the researchers found that the prevalence of obesity in women jumped from 25% to 35% and from 20% to 35% in men. Think there may be a connection?