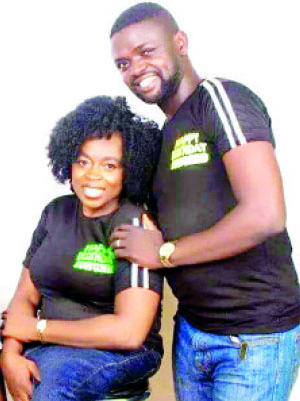 There is no doubt at all that the story of fast-rising gospel singer, Funmilayo Ajiboye a.k.a Layo, who is physically challenged, is nothing short of inspiring.

Despite being struck by polio at a tender age which rendered her paraplegic, Layo today is a singer who is making waves in the gospel music circuit in Nigeria.

She is happily married to the man of her dreams. And beyond her physical appearance, her soulful voice is capable of melting a heart of stone.

In an interview with SunNews, Layo shared the story of her life, recounting the day she almost committed suicide, how she met and finally married the love of her life, Ajiboye Bamidele. She began:

“I would have been long dead and forgotten, but for the grace of God and his swift intervention in my life. That is the foundation of my decision to use my voice to glorify the name of God and this is why I am into gospel music.

On the fateful day I attempted suicide, I had written a suicide note. I did not have a job, society had rejected me and I was frustrated. I wanted to quietly end it all by jumping onto the Lagos Lagoon where my body would feed hungry sea animals.”

Recounting what made her contemplate suicide, Layo said:

“It was an ugly situation for me. It became even more serious when rejection set in mainly from the society after my parents got separated and I sank into depression.

I sought menial jobs as a salesgirl and receptionist after I finished my secondary school, but nobody was willing to give me any because I was physical challenged; society rejected me!”

Layo said that her ugly experiences due to her disability are too numerous to recount:

“They are uncountable especially with commercial bus drivers. When I plead with them to help me stop at a particular place to ease my movement, they would always refuse. On a particular day one started raining abuses on me saying that it was my attitude that made God to create me crippled. I was like really? It was extremely painful! But I guess he was one of those drunk drivers.

“With no means of survival I got depressed, feeling sub-human and wanted to commit suicide by jumping into the lagoon.  After I wrote my suicidal note and was about to step out of my room something very strange happened. I heard the voice of God, loud and clear.

READ ALSO: Physically Challenged Man, Damilola Akintade Who Recently Got Married Answers Those Who Are Surprised He Found Love Despite His Condition

The voice said ‘when your father and mother forsake you, I the Lord will pick you up.’ I was astonished and I asked myself, did I just hear that? What I heard comes from Psalm 27:10. I fell down in awe of God and asked for forgiveness for attempting such and that was how my life took a turn around.

I entered into a three-day-dry-fasting asking God why He created me. I got my answer on the second day of the fasting where I saw myself holding a microphone and right by my side I saw different currencies of the world being given to me by different hands. I then asked God the meaning of the dream and He told me. The vision is my motivation into music.”

Today she is happily married to the man of her dreams, Ajiboye Bamidele and they have an adopted daughter. Recounting how she met her husband she said:

“He is really supportive and is rare gem especially in the area of shopping for me at major markets. There are things that most men dread, but it really amazes me when he does them without complaining.

We met at church. It wasn’t love at first sight. All I was interested in was in helping him get closer to God and before we knew it one thing led to the other and today we are happily married. If I have to quote him, he said my service to God in the church and the ways I single-handedly handle house chores without stress attracted him to me.

When he came to visit me before we got married; he got interested in the way I cooked for him; I guess my food also attracted him to me. We got married on May 26, 2016. We are two years plus in marriage. No children yet, but we have an adopted daughter.”

Layo revealed that she started singing while she was in primary school in the 80s. But in the last 21 years, she has been performing at different churches using her melodious voice to draw souls to God. Her words:

“My major aim is to draw the heart of people back to God. My role models are Jesus, Don Moen, Cece Winners and Joyce Meyer. I get my inspiration from my environment and situations around me. My husband is into computers, but he is very supportive and is learning to play the talking drums now.

I am currently working on dropping a music video and I am also working on a book which will tell my life’s story, but the pandemic took its toll on my music as the entire world was shut down for months.”

ALSO SEE: ‘My family refused to attend my wedding because my wife is physically challenged” –  Couple Shares Amazing Love Story

Today, Layo has two albums to her credit entitled ‘Going Forward and Thank You Lord.’ She also has singles like ‘Little Did I Know, Ko So Ohun To Ko Le Se Oluwa, Tire Ni Mi and The Earth is The Lord’s’ among others.

She is spreading the gospel of hope everywhere she goes and to everyone who might be on the verge of giving up on life. She said:

“No matter what you are going through, reach out to The Lord and He will answer you. I was in the valley of the shadow of death but He rescued me. If God did it for me he could also do it for you too.

My mission now is to bring hope to the hopeless and let them know that there is another day for us all. My dream is to travel around the world glorifying God with my voice and sharing my life’s story.”