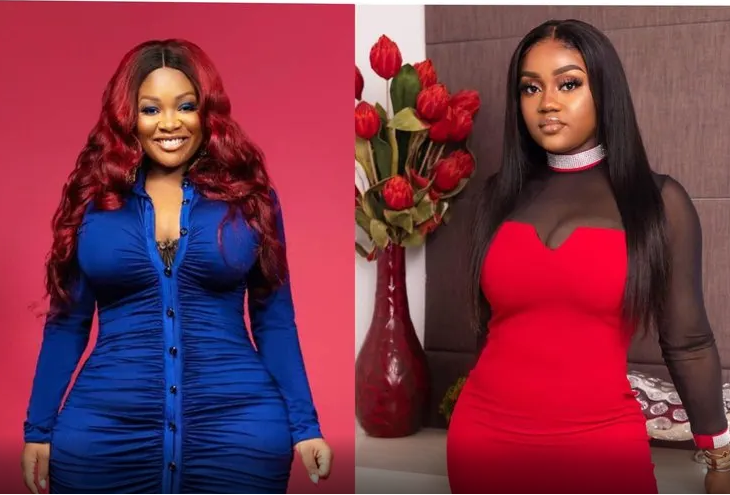 Nigerian On-air personality and mum-of-two, Tolu Oniru -Demuren, better known as Toolz has counseled Nigerian popstar, Davido‘s third baby mama, Chioma Rowland, on what to do in the wake of breakup rumors and his alleged relationship with American model, Mya Yafai.

In February, 2021, Davido was seen stepping out with Mya leaving many to wonder what is going on. More recently, he was seen on camera locking lips with the model and reports have since been flying that he and Chioma are no longer a thing.

To further spark the break up hint, Chioma deleted all the pictures she took with and posted of Davido from her Instagram page.

Speaking in the “OffAir” show she hosts with OAP Gbemi, the deft broadcaster expressed her disappointment that Chioma did not completely establish herself before the saga blew up, adding that the only thing she would have wanted was the mother-of-one setting herself up before the news went viral.

When asked for some suggestions on the way forward for Chioma, Toolz suggested that she hire a photographer to take mind-blowing pictures of her on a regular basis, which she would then post on Instagram.

She also urged Chioma to step up her game and form partnerships with well-known brands, which could lead to lucrative endorsement deals.

SEE ALSO: Davido Shares On How He Balances His Family & Why His Wedding Plans With Chioma Rowland Is On Hold

Just a few days ago, ‘Your View’ show host, Veronica condemned Chioma over the way she handled her career while in a relationship with the singer.

Veronica faulted Chioma in her comment over the issue saying that she showed lack of intelligence by thinking a baby can keep a man like Davido.

Watch the clip below;

— Chioma thinks a baby can keep a man like Davido. I pray to God not to give me children that don’t have sense. — Yourview Show-host, Veronica

Last year, on episode 11 of “The Juice” season 4, Davido tells Bolanle Olukanni about his relationship with Chioma, marriage, future plans, and more.

Speaking about their relationship, the 27-year-old star who popped the question to Chioma in September 2019, 10 days after their families had an introduction in Lagos said he felt pressured to marry Chioma.

The singer revealed Chioma as his girlfriend in the video of his hit song, ‘Assurance’. Since then, according to Davido who has other children with different women, Chioma has received hate messages from people on social media .

According to the ‘Fem’ crooner, making his relationship with Chioma, mother of his son, Ifeanyi public affected her life and their relationship.

When asked if they would still get married, Davido affirmed that but said it’s not the right time. According to him,

“We would get married but not now. We are trying to make the foundation solid and I’m so happy now that Chioma is focused on making money. We are not riding on the wave that people want this for us.”

READ ALSO: Davido, His Babymamas And The Drama About Fiancée, Chioma’s ‘Special’ Baby

In a previous interview, Davido briefly spoke about their love story and why his heart belongs to his lover of five years.

“I have known Chioma for about seven years. We have been dating for about five years. Lati introduced me to Chioma. We went to the same school, Babcock University. We started as friends but I got so used to her and she got so used to me as well. She is a great cook as well.”