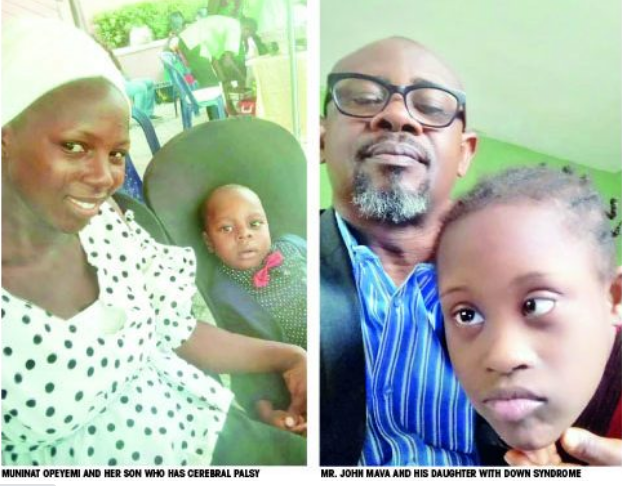 Bishop And Mrs. Elom Share Secrets Of Their Happy, Enduring Marriage Of 25 Years In spite Of The Challenges That Arose In The Early Years Of Their Union

The term special needs can be referred to a vast array of diagnoses and/or disabilities. Children with special needs may have been born with a syndrome, terminal illness, profound cognitive impairment, or serious psychiatric problems.

Other children may have special needs that involve struggling with learning disabilities, food allergies, developmental delays, or panic attacks.

Mr. John Mava, a devoted and loving father, got the shock of his life when the proprietress of his daughter’s school told him that she couldn’t continue to accommodate the little girl in the school.

Sad and perplexed at the same time, he asked her why she would make such a comment given that both of them had enjoyed a cordial relationship since his children started attending the school.

Mr. Mava told Saturday Sun that this happened when he went to the school for the Open Day programme, a day when parents visit their children’s school to access their performance by checking their books and listening to their teachers’ remarks bordering on issues affecting the child.

According to him, after going round his children’s classes, he decided to say hello to the proprietress of the school and tell her how the school can make more progress. But after pleasantries, she bluntly told him she could not continue to accommodate his special needs child in the school. Mr Mava said:

“I asked why; she said because of her state. My daughter is actually a special child. We gave birth to her with Down syndrome. I was speechless and in utter shock. I was sober and tears filled my eyes.”

That experience shook him so much that he has not been himself ever since. This is because at this time and age, such discrimination against a child with special needs by a school proprietress is shocking and uncalled for. It made him think about the kind of life his daughter would have in this society.

We fear for our children, parents with special needs children reveal

Mrs. Sylvia Ezeh has an 8-year-old child with autism. Since she gave birth to her son, some friends and family members started avoiding her. This is because they believe that children with special needs are a curse or the result of some kind of punishment from God.

Ezeh loves her son and hopes that he would live a normal life like other children, but the discrimination he suffers in school and other places breaks her heart. She is tired of people looking at her son with pity and shielding their children from him as if autism is contagious.

According to the 35-year-old mother of two, one incident remains fresh in her memory regarding discrimination against her son. It hurt so much because it came from someone who was supposedly educated and one who was supposed to teach others that children with special needs are not cursed. Ezeh said:

“One day in church, my son was playing with some children when one of the church workers rushed to the scene and dragged her son away from him. She warned me to hold my son close and not allow him infect other children with his sickness.”

Ezeh looked around, hoping that someone would reprimand her for saying such a hurtful thing to a child’s hearing but the people around looked away and pretended not to notice what just happened. She was heartbroken but decided to defend her child against discrimination.

“I took my son’s hands, looked at the woman and told her that my child is autistic and doesn’t suffer from a contagious disease. I assured her that my son would never play with her son again but warned her to never call my son names again,”

SEE ALSO: MUST READ: “Through her, I discovered giving up is not an option” Mum of a Child Living With Cerebral Palsy, Helen Dan-Arry Shares Powerful Message

Mrs. Doris Bassey is raising a child with special needs and it hasn’t been easy navigating the world with her child. She is accustomed to the strange looks she gets from people when she goes out with her son. She has accepted her son and loves him for who he is, even if she knows the world may give him a hard time and not accept him for being different.

Bassey noted that this society spares no empathy for parents of special needs children, because they somehow judge them for having such children. Some people don’t hide their disdain for children with special needs even though it’s not the fault of these children that they were born different.

Mrs Bassey said she almost slapped a man one day when he blurted out that she should keep her imbecile son quiet while they were waiting for their turn to be attended to in a hospital.

She said that this man came in with his daughters who were age mates with her son and the children started drifting towards one another. She wasn’t really paying attention to what was happening because she was taking a call when this man beckoned on her and told her to keep her imbecile son away from his daughters. She recalled:

“I started crying immediately. I was shaking from the embarrassment that I didn’t know when I moved closer to the man and raised my hands to slap him but someone held me back. I told him that his daughters are imbeciles, not my son.”

It took the intervention of some hospital staff to calm her down. They reprimanded the man for talking badly about a child like that. It was one of the many instances her special needs son has suffered discrimination and it breaks her heart. She fears for her son and the kind of life he would live in this country.

Mrs. Muminat Opeyemi is a mother of a boy who lives with cerebral palsy and he will be six in May. Cerebral palsy is a neurological disorder that affects muscle tone, movement, and posture. Opeyemi’s son is fully dependent on his parents to do everything. Sometimes, he has seizures too.

As a mother to a special needs child, Opeyemi revealed that her son suffered discrimination while she was school hunting for him. She went to six schools, but they politely told her that they might not be able to give him what he needs to learn like other children. She thinks it is based on their belief that every special needs child should be in a special school. Opeyemi said:

“I carried him on my shoulders and walked into the headmistress office. I explained to her that my child is living with cerebral palsy and it is not contagious, I gave her his medical report as evidence that my child can learn among his peers without disability.

“Her first word was, ‘Madam, this is not a special school. We can’t accept such here. What do you want other parents to say about our school? You need to take him away from here before one of the parents sees you and him here. Please go.”

Opeyemi revealed that the headmistress said it in a way that made her sad. Even though her son was accepted by one inclusive school in her area last year, he is in reception preparing for nursery class now. She said:

“He is nonverbal, but he hears very well and he is learning. With the aid of technology, he will be able to communicate in the future.”

When Mr. Taiwo Odeyemi learnt that his only daughter had a developmental delay, he was in denial. He didn’t believe that a healthy looking girl would have issues developing like her mates.

His attention was first called to the fact that she was bumping into things and doesn’t have coordinated movement of her legs. It took him and his wife time to make up their minds about taking her for assessment in a general hospital because they didn’t want her to be subjected to any kind of discrimination.

After she was diagnosed with developmental delay, Odeyemi started helping his daughter live a normal life like other children. He had to enroll for a course designed for children with special needs just to understand how to relate with her since his wife was very impatient with her because she was slow. He stated:

“I invest a lot in therapeutic toys because my daughter loves holding on to things. You will never find her without holding something, no matter how small. I buy her therapeutic balls designed for children with special needs.”

For Odeyemi, handling people who treat his daughter differently is the hardest part of being the father of a special needs child. He wants his daughter to be treated like any other child and not looked down upon by teachers because she has developmental delays.

“All I can do is let people know that she’s like every other child and should be treated as such. But her inability to sense danger is one of the reasons I always stay close to her, no matter how busy I get with work.”

After getting over the initial shock of discovering her baby had Down syndrome, Mary Ibekwe went on to learn everything she could about the disorder. The plan was to give her child all the love her heart could muster. She said:

“That was when I saw the ignorance that was very prevalent in the country. There was a lot of stigmatisation against my child. Many people were saying things like ‘We’re going to take you to see one church man who will carry out deliverance. Wicked people usually send these children. This isn’t the child God sent to you,’ and other annoying statements.”