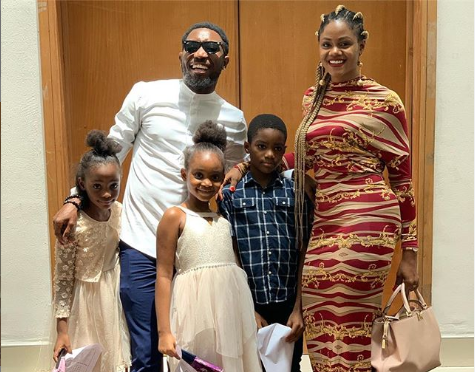 Sensational Nigerian singer and songwriter, Timi Dakolo has disclosed that he and his wife have talked to their children about her rape ordeal.

Recall that his wife, Busola Dakolo came public with rape allegations against the global senior pastor of Commonwealth of Zion (COZA), Biodun Fatoyinbo in June 2019. Busola made headlines when she revealed in an explosive interview that she was raped twice by the Fatoyinbo when she was fresh out of secondary school (read Here).

In the tell-it-all interview with Ynaija, the mom-of-three added that after raping her, the married dad told her she should be happy it was a man of God who deflowered her.

In a very recent interview with Nigerian media personality, Toke Makinwa, Timi gave reasons why they told their children about his wife’s rape ordeal.

According to the R&B singer, he raised his kids in a different manner and they had the opportunity to inform them about it. He added that children love validation and his kids express themselves freely to him so he had to make them understand what their mum experienced.

READ ALSO: Timi Dakolo Holds Nothing Back As He Opens Up About Standing With His Wife On Her Rape Allegation With COZA’s Pastor

“Yes, we informed our kids. I think I raised my kids differently. Children love validation. My kids can talk to me and express themselves very well.

I had to make them know that their mother is a superhero. I explained that it was a painful experience that happened when their mum was very young.

They understood even though they might not know the gravity of what it was. They understood that something was happening. So, anytime they go to her, they give her a hug.”