What Couples Battling Infertility Need To Know About Surrogacy

According to the mother of one and food vendor, the injury has left her 2-year-old son bleeding and in severe pain.

To crown it all, the businesswoman said it’s been three days now and the Hospital management is yet to checkup on her son, no call, no text message or apology tendered for their unprofessionalism.

READ ALSO: Nigerian Mom Outraged After Nurses Of A Popular Children Hospital Asked Her To Do This Before Treating Her Sick Child

“It’s been 3 days since @lifelinechildrenshospital accidentally poked my 2 yrs old in his ears which resulted to bleeding and severe pains and there’s been no call or a text message to check on him or apologize for their unprofessionalism.

Actress Ada Ameh Cries Out For Help: ‘I Have An Issue That Is Taking My Life’

It’s a shame this shit hole is supposed to be one of the best children’s hospital we have in Lagos and my experience with them thus far has been tragic.” 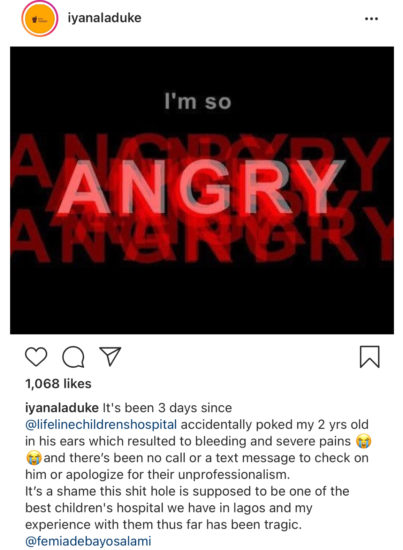