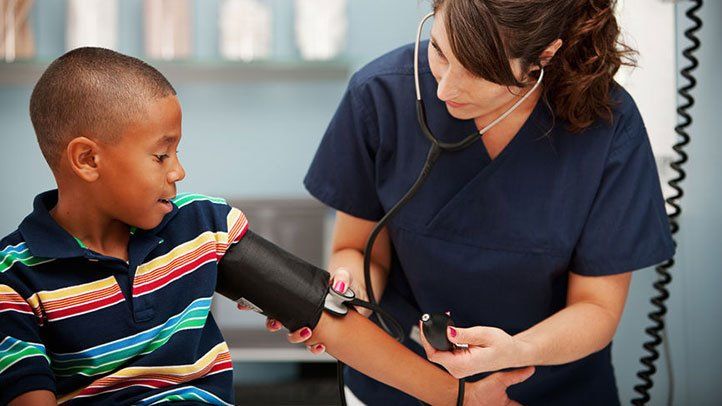 According to the expert, abnormally high blood pressure in children, which is usually undetected or not taken seriously, has serious consequences, including organ damage.

Anthony told the News Agency of Nigeria in Abuja on Tuesday that besides diabetes, being an adult disease on the rise in children and adolescents, high blood pressure had become more common.

The Abuja-based doctor, however, said parents or their children’s doctors are sufficiently aware of this growing health problem.

He attributed high blood pressure in children mainly to increasing obesity in the young – an often underlying and treatable disorder.

According to him, blood pressure is determined by the balance between the output of blood from the heart and the resistance to blood flow in the arteries. He explained further:

“The greater the resistance, the harder the heart has to work to get oxygen-rich blood to the brain and outer reaches of the body.

“A major consequence of untreated high blood pressure in children is an enlargement of the heart’s main pumping chamber.

“Left ventricle hypertrophy, as this condition is called, can develop in just a few years in children with hypertension.

“If a child’s hypertension is detected and brought under control, the enlargement will regress. But if it’s not treated, it just gets worse and can eventually lead to heart failure.

“Other consequences of untreated hypertension in children include atherosclerosis, the arterial disorder that leads to heart disease and stroke later in life.”

He stated that at high blood pressure is termed primary when the cause is not known, and secondary when it arises from illness or certain lifestyle choices. The expert said:

“Secondary causes of high blood pressure in children and teens include kidney disease and heart disease; prescription of medicine such as corticosteroids or birth control pills; illegal drugs, such as cocaine or methamphetamine.

“Others are endocrine disorders such as overactive thyroid hyperthyroidism and diabetes; mental health causes such as mental stress and anxiety.

“High blood pressure often doesn’t cause any symptoms. This is why it is often referred to as the silent killer. It’s often found during a routine visit to a healthcare provider.”

Anthony advised the government to make it mandatory for children under the ages of three and above to have their blood pressure measured every year.

“In general, blood pressures in children should be lower than in adults. In adolescents, for example, a blood pressure of 120 over 80 millimeters of mercury is considered to be pre-hypertension, a condition that sets the stage for full-blown hypertension.”

According to him, health providers need to know more about blood pressure in children. He said:

“The more doctors know about the treatment, the more likely they are to make a diagnosis.

“It depends on a child’s sex, age and height, with pressures in the 90th percentile and above should be considered unhealthy.

“Full-blown hypertension in children is defined as pressures in the 95th percentile and above. For adults, only one measure is used to define high blood pressure.

“Nigerian parents, too, are part of the problem of missed diagnosis. Parents have very little awareness that their children could have high blood pressure, and they fail to make sure the doctor checks it and tells them the results.

“Parents should ask at every visit, ‘Did you check my child’s blood pressure, and is it ok?’.”

According to him, if a child is upset or nervous in the doctor’s office, blood pressure may be higher than usual.

“Children should sit quietly for about 10 minutes before blood pressure is measured, with two more measurements taken if the first one is high,”

Anthony explained that if all three readings are high, the child should return for a follow-up visit. He said:

“A diagnosis of elevated blood pressure in children depends on finding a high reading on three separate occasions.”

On dealing with obesity in children, he advised parents to establish intermediate goals that could gradually reverse a child’s risks, rather than setting goals that could be initially impossible and capable of discouraging further efforts.

Anthony said the focus should be on a lower-calorie diet, emphasising vegetables, fresh fruits, fiber and nonfat dairy; a reduction in dietary salt.

“Others are regular physical exercise towards a goal of 30 to 60 minutes of aerobic activity on most days; a limit of screen time and working toward a maximum of two hours a day, spent on sedentary nonacademic activities,”