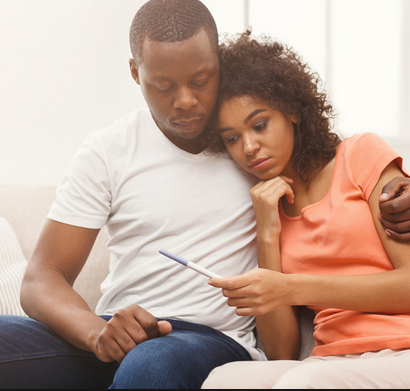 Nigerian couple, Osas and Jane started trying to get pregnant in early 2014 while in Benin City, Edo State. About two years had gone by with no success. Around November, Osas took up an employment opportunity to move to Lagos, and once settled; they again started trying again for about eight months, but still could not achieve a pregnancy.

So, they decided it was time to start looking into why nothing was happening. Jane went to several gynaecologists for scans, ultrasounds, and blood tests.

The results showed that she wasn’t ovulating, so she was started on a fertility drug to help stimulate ovulation. After the results of the tests came in, she was diagnosed with having polycystic ovarian syndrome, PCOS.

PCOS is an endocrine system disorder that affects women in their reproductive years. Most women with the condition grow a number of small cysts, or fluid-filled sacs, on their ovaries.

The cysts are not harmful, but they can lead to an imbalance in hormone levels. They may also experience menstrual cycle abnormalities, increased androgen (sex hormone) levels, excess hair growth, acne, and obesity

In addition to the many health conditions associated with PCOS, which will be discussed in this article, PCOS is the most common cause of ovulatory infertility in women. Women who can conceive with PCOS have a higher incidence of miscarriage, gestational diabetes, pregnancy-induced high blood pressure, preeclampsia, and premature delivery.

The couple were seeing a gynaecologist. For about three months nothing definite was found and everything was getting a little frustrating. But the clinic kept going over their records and continued the use of the fertility drug, introducing FSH injections and progesterone.

Over the next 12 months, they tried artificial insemination, it was unsuccessful, and so made the decision to go further into In Vitro Fertilisation.

Jane had some eggs collected, 15 were retrieved, but after fertilisation, only three survived. The first embryo was implanted and two weeks later, to their surprise, Jane was pregnant and very excited.

SEE ALSO: Ask the Experts: Had My First Child Despite PCOS 4 Years Ago. Why Can’t I Conceive Again?

The six-week scan went well, but at the 10-week scan it was found there was no heartbeat. The embryo had not progressed from about week seven. They were devastated.

They continued on the same track of still not knowing why they couldn’t get pregnant. Jane continued on the medication and the second embryo was implanted about five months later. It didn’t take. With only one embryo left, they were starting to feel quite negative, and unfortunately, the personal touch seemed to have been lost.

They had the last embryo transferred a couple of months later with great hope it would be positive, but it was not to be. Coming up to four years of trying to conceive with no success, they were all but finished. It was back to the drawing board. They tried Fertility Clinics

Some time afterwards, Jane ran into a friend who also had been having fertility treatment at another centre. She was amazed listening to what treatments she had tried in only 6-12 months compared to everything they had been doing in four years. She and Osas decided to make a change.

They shifted base to another fertility clinic. Their original diagnosis of having PCOS was confirmed and they both felt the right decision had been made. They were feeling more positive than they had in months.

They started again, but now with a firm diagnosis to work with. Jane was put on Metformin, a medication that slows down the insulin the body creates which produces the cysts.

More eggs were collected, so they went through the process of getting ready. Twelve eggs were removed and 11 were fertilised.

After some time, the first embryo was placed back inside. After the two week wait to find out the result the blood test was a long, agonising wait for the results to come the next day. But when the phone rang they were given the best news: It was positive. The tears came but were years of joy.

Married For 30 Years, The Onos Share The Beautiful Journey Of Their Love Life And Advice For Intending Couples

For the next 16 weeks, Jane and Osas felt like they were holding their breath. She was pregnant, along with doing more home pregnancy tests just to make sure it was real.

Throughout her pregnancy, Jane suffered no health issues or problems at all. Osas, being the romantic husband, was always on hand to ensure that she avoided stressful situations.

At week 40, everything was still intact. It was safe to continue to 42 weeks, but she was beginning to get a bit anxious, so they decided to have the baby at week 41.

They went into the hospital and a foetal monitor was put around her stomach. The doctor did an examination. It seemed that nothing was ready: Her cervix had not started to dilate or soften in any way, shape or form.

Due to having no signs of being ready, all the midwives expected that they would be there for some time, but to everyone’s surprise, contractions started a few hours later and were quite strong and. Her waters broke and with encouragement to keep pushing and breathing until the precious little bundle arrived.

The birth of their baby made everything Osas and Jane had been through worthwhile and much more. They still believe if they had not made the decision to change their situation, their long-awaited day may have never arrived.