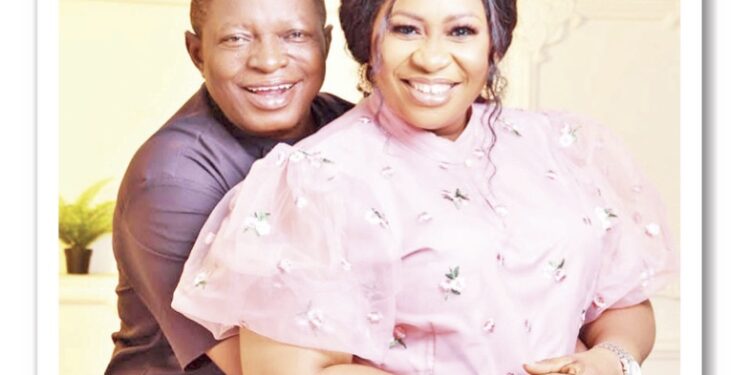 The Deputy Comptroller of Customs, Mr Benjamin Obiakalusi, recently sealed his love for his wife of many years, Loveth, a business entrepreneur, with a white wedding. That was after 28 years of a blissful traditional marriage.

In an interview with Daily Sun, the man popularly known as ‘Ugo Nabu’ Aham Kingdom, from Enugu-Aku in Achi, Oji River, Enugu State and Loveth, reminisced on their marriage, love life and marital relationship.

Benjamin: I met her at Abaji, Abuja. I had just graduated as a geologist from Anambra State University of Technology in 1988 and was fresh from National Service while looking for employment. Her older sister is married to my cousin and they lived in Abuja.

The family actually had links ab initio, because she was living with her sister as a student of Government Girl’s Secondary School, Abaji while I came to my cousin’s house to look for greener pastures.

She came home and I was teaching her mathematics, solving some questions. I behaved myself in all sincerity; maybe that was why she liked me. I was careful not to lose her when I saw her rate of concentration.

Loveth: I was a secondary school student who didn’t know anything about love and relationship. I brought my mathematics questions to him since he was a graduate and liked his manner of explaining the topics to me. He made mathematics very easy for me in school.

Why did it take you up to 28 years to walk down the aisle?

Benjamin: We had it in mind all these years. But since we had done our traditional marriage, which is the most important because our families blessed us, we also proceeded to the registry to get our union legalised, so we knew it would happen one day.

Again, I did it because that is the only aspect we have not fulfilled, even though we live very happily. I promised my wife that I would do everything within my reach to keep my marriage because she is so lovely and dear to me. Our union gets sweeter on a daily basis as if we just started.

Loveth: My heart is gladdened. I feel on top of the world because this is the man I love so much from the very beginning, even though I did not know much when I married him. But he promised my mother that he would be everything to me.

From our little beginning, he showed me a lot of maturity and responsibility. Like he said, we have been married legally both in traditional way and at the registry. I feel so excited; it is my dream come through. Even though we are 28 years in the marriage business, I told my husband that I wanted a celebration blast.

Through the grace of God, he gave it to me. I always said I have a story because there is no time frame for the right thing to be done. Any day that one wakes up and discovers new dreams, do not hesitate; get it done.

My husband has told you we run a ministry and must get things rightly done. That I didn’t wed at the earliest time does not mean I will not wed. But I did it at God’s own time. God made our time beautiful.

Benjamin: All I saw in her was love. She is an angel, beautiful with solid character. She has all a man needs in a woman. She is all I need from the first day. When we met, I discovered she is good in science subjects, contented and wasn’t looking out for what to get from me.

It was body chemistry because as I taught her, she listened attentively and grabbed all that I taught. Again, I noticed she was not out for boys then. She was just pure; I also became careful around her because any move from me might destabilise the attraction.

I just taught her and left it at the teaching level; but I began to study her closely. She would come back from school and tell me all that happened and I was happy because she was on the right track. One thing led to the other and brought us to where we are today.

Loveth: I was very young and naïve then and didn’t know what the attraction was, but I think it came later. But he was humble to the core even as a geologist then. He would wash cars, fetch water, sweep the house; neighbours were doubting if he was actually a graduate. He was also very honest, and a great teacher.

SEE ALSO: Knowing Your Spouse Before Getting Married And More: The Oziokos’ Share Nuggets From Their 50-Year Marriage

Were there oppositions from either parent when you made your intentions known?

Benjamin: There was opposition because I just started work and my parents felt I should face my work, not marriage at that time. Again, she was in secondary school and they considered her too young for me.

Also, the issue of taking care of her responsibilities, including paying her school fees were all there; in fact, my parents got a graduate for me to marry, but I rejected her and said, it’s Loveth or no one else.

My siblings painted a picture of her not being a wife material; I stood my grounds because I knew what I saw and where I saw her. I won all the battles and married my wife.

Loveth: Yes, there were oppositions, like my husband pointed out, but they did not deter us.

In what area would you like your wife to change?

Benjamin: Just one area; my wife is a very big giver and believes in faith. She can give all that we have and tell me that God will provide. I am a practical person who believes in a bird at hand is worth two in the bush so that we do not go begging one day; if she can change a little from that, it will be nice. Though I do not hide anything from her. We rub minds together in all we do. She manages me effectively.

Loveth:  I don’t think there is anything I want him to do differently. He is a good and sincere man. I love him the way he is. If there is re-incarnation, I will marry him over and over.

What was the funny experience about your recent wedding?

Loveth: The unique thing about this marriage is that it’s been love from the first day till date. My husband’s maturity and responsibility have played a big role in our union.

I used to be very stubborn so much that I could not say sorry to him but his maturity has softened me. I live with a man who does not tell me lies; I have access to his finances because he does not hide it from me.

How did you propose?

Benjamin: I asked her: would you marry me and she said yes. We went to our different parents who all said no. But we agreed to be together and won all the battles.

Describe your hubby in a few words.

Loveth: I found my father in my husband. He is a leader, director, protector and provider. When one has a man with all these qualities, the wife would simply go to bed and sleep like a baby! He is a loving and God-fearing man. His maturity, not mine, binds us together.

BBNaija Star, Erica Tells Us Why She Won’t Be Rushing Into Marriage

I had my juvenile issues but he kept me with an attribute of a sincere man. When he came to ask for my hand in marriage, my mother told him, I am too young that I can’t cook or do any house chores. My husband told her, ‘don’t worry, I will teach her.’ And, true to his words, he taught me.

My husband has never attempted to raise his hand on me. He loves me genuinely as his wife. I do not joke with him. One can hurt me and get away with it, but, if it is to the man who accepted all my stubbornness, I will fight with my last drop of blood.

ALSO READ: Here’s What The Abaimus Want Intending And Newly Married Couples To Learn From How They Overcame Challenges In The Early Years Of Their Marriage

How do you manage your finances?

Benjamin: We used to have a joint account but it is not functioning at the moment. In marriage, you try out things. While some work, some might not because life is not a bed of roses. We recognised it was not working at a time: that is the reason why no two marriages are the same. She has her accounts details while I have mine, yet, we still operate a skeletal joint account.

Do you use sex as a weapon to fight back when there is a quarrel?

Loveth: No, when there is a quarrel, I do not allow our disagreement to linger – reason one should marry his or her friend. When we quarrel, anyone can apologise first. Don’t forget I work with women and I repeat that no woman should use sex to fight her husband. I have not forgotten one of my ministrations in Ghana.

This topic came up. One of the ministers was almost crying because his wife was so good at sex-starving him, knowing full well that her husband had professed not to go outside their matrimonial home.

Benjamin: If you punish your husband with sex, you are literally sending him outside the home. Don’t forget that anything and everything is possible in life, because he might go outside and discover a better woman.

How do you handle your husband’s female admirers?

Loveth: I believe in feminine intuition and revelational knowledge. I do not have issues with his female admirers but one has to be careful with ladies with ulterior motives. There are ones that are just pure, but in some cases I have come all out to fight though not physically but with my two knees on the ground and God answered me. Not all female admirers are harmful.

What advice would you give to intending couples?

Benjamin: For intending couples, have it in mind that the person you are marrying is coming from a different background, reasoning, understanding and training. All of these might not be the same way with yours. But if you give her the right attitude and time, she will change.

Don’t hide anything from her, even if you are a thief, let her know you are thief, if she likes you, she will stay with you. Do not pretend, hide anything or listen to third parties.

I also ask that you stay alone as newlyweds to solidify your foundational period and strengthen your relationship first before bringing in relatives. Another solid ingredient in marriage is: ‘I am sorry’ not minding whose ox is gored.

Loveth: One cannot separate God from marriage! Just follow the way God directed it in the Holy Book and love your wife as Christ loves the Church. To the woman, submit to your own husband as God charges you to do. Sincere submission brings a lot of good things into one’s union.

Feminism has no role in marriage. You are the wife and entitled to be happy in your marriage. There is no sin that is not forgivable. Learn how not to hold things in your heart and move on to a happy greater marriage. Finally, prayer remains the key.