Former Jenifa’s Diary actress Juliana Olayode has now made some shocking revelations about her former manager and ‘spiritual father’ pastor Timilehin Adigun after previously calling him out for taking control of her Facebook and other social media accounts.

Yesterday, Juliana, who starred as Toyo Baby in Jenifa’s diary, called out her former foster father and accused him of refusing to release her social media account passwords to her.

She said she has been trying to get her passwords back from him, all to no avail. Crying, the actress narrated how she recently got a text from an individual who asked about her relationship with Timi Adigun and she immediately placed a call seeking to know the reason for the question.

Juliana said the man then informed her that her Facebook page was unpublished by someone called Timilehin Adigun.

She then recounted how she tried to retrieve her passwords from the Pastor in 2020 but only backed down due to the intervention of people around her.

Juliana said that the Pastor proceeded to impersonate her on Facebook and uploaded a picture of him and his wife via her account.

She said that her uncle also later informed her that Adigun had unpublished her Facebook page. She said this affected her Instagram because the pages are linked.

Juliana said she called Adigun but he didn’t pick so she called his wife and spoke angrily to her about her husband’s actions.

She added that she then went to his church and requested to see him but their conversation was far from civil and Pastor Timilehin Adigun called security to throw her and her sisters out of the church.

Crying, Juliana said she doesn’t like drama or fights and just wants Adigun to give her back her passwords and set her free.

She wrote in the caption of the video:

“I know some people are going to call me and say all sort but I AM TIRED!!!

To some people, this might be a wrong move, and some might prefer I stay quite but I am honestly TIRED!!!! And I am not going to shut up.

I DON’T KNOW WHAT Timilehin Adigun wants from me, I really don’t know.
There is so much I want to say but I don’t even have the words to express it.

I also know that people are going to have different opinion about it.

Right now, I don’t want anybody calling me or texting me to tell me how to go about my life, what to say or what not to say, what to do or what not to do, nobody should tell me what the spirit is saying to them or tell me to think about the church and the body of Christ. I don’t want to hear any of it.

I don’t understand why I am having to pay or stress to get my stuff from a guy who is sitting in his mother’s school doing nothing.

I just want my passwords for goodness sake and I want Timilehin Adigun to leave me alone!”

Now exposing his filthy attitude, Juliana in a new video on Instagram accused the pastor of sexually abusing her sister.

In the video, Julianna addressed Pastor Timilehin’s claim that she came by his office and was shaking because she knew she had wronged him.

In the video she posted, Julianna clarified that she was shaking because she got to find out that Pastor Timilehin had allegedly invited her sister over from school, lodged her in a hotel, and was touching her inappropriately.

She said she suspected a while back that the clergyman was touching her sister and had visited him to ask him never to touch her sister. She said he denied the allegation, accusing her of using his ”weakness and struggles” against him.

she said in the video. The caption that accompanied the video she shared reads

”Timilehin Adigun, I can not make sense of the videos you did. Just when I think I have seen it all, you reveal another side of you. I thought I knew you but I didn’t. You have no heart! Your videos brought back memories, sad memories, painful memories, I have not been able to stop thinking about them, I can’t even sleep.

Did you listen to yourself at all? I don’t think you did. You manipulated and sexually abused my sister and you thought I would be calm, you expect me not to be furious, how are you processing the things you did and the things you said? How? I don’t get you.

You talk about apology and forgiveness. Forgiving you is a process for me. I forgave you then, for may sanity, just when I am trying to move on, you do something else that triggers me and I get mad at you again and I beg God to help me forgive you again.

The hurt is really deep, the pain, the trauma, the disappointment, the sleepless nights, the tears that drenched my pillow, the shock, the entire experience is indescribable. Like I said, there is so much to say. I don’t have the words yet.

My book Rebirth is full of your praises Timilehin, I spoke about all the things you did for me. Even though then you had done it with two or three people that I know, but they were in good terms with you and they had forgiven you and everything seem to be okay.

I saw you as a Father then, so I couldn’t write a book and talk about your past. You kept telling people, ‘ if Juliana ever talks about this she’ll ruin herself and her career, she’ll never be able to say it, she will be contradicting herself, Rebirth will speak for me’.

By the way everything I said about Timilehin in Rebirth is true, and that’s why the hurt was really deep for me…. and I didn’t know what to say and how to say it and I didn’t want to look like the ungrateful person.

I couldn’t talk to anyone, I remember talking to somebody I respect so much for the first time about it because I wanted to get help and feeling guilty I did, processing the whole thing in my head and hoping I didn’t do wrong by telling someone about it, different thought in my head, you meant so much to me that I couldn’t say anything bad that you did and not feel terrible.

Wo…oro po….there is so much to say… You know your children Timilehin, don’t ever call me you daughter again! And don’t ever call yourself my father again! I don’t know why you mentioned Jenifa’s diary, you want people to drag me for the mess you made.

You are just wicked honestly, what has Jenifa’s Dairy got to do with passwords. You sent an email and messed up the whole thing. Never said anything about it, people said all sort of things to me then, some are still talking till today.

You messed things up and I paid for it, who did I tell? I almost went crazy when you started put the blame on me, as you have a habit of to blaming me for different thing, you just never take responsibility for the things you do.

I had to talk to the person who was present the day you sent the email as I thought I had amnesia. I even had to chat with the director, because it felt like I was going crazy….”

This is not the first time Timilehin has been accused of molesting young girls.

In December 2020, he tendered a public apology after he was accused of sexually assaulting a number of the teens in his ministry known as  MINE Teenage Ministry.

ALSO SEE: Pastor Timi Adigun Of MINE Ministry Issues Public Apology, Admits To Taking Advantage Of Girls He Was Mentoring On Sexual Purity 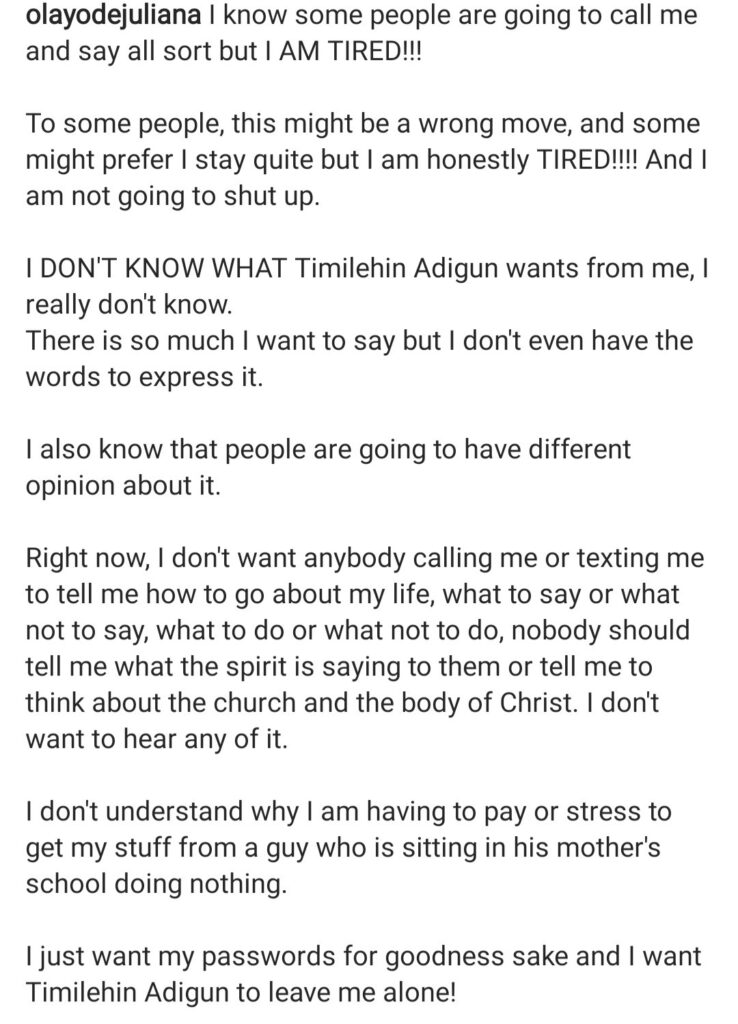