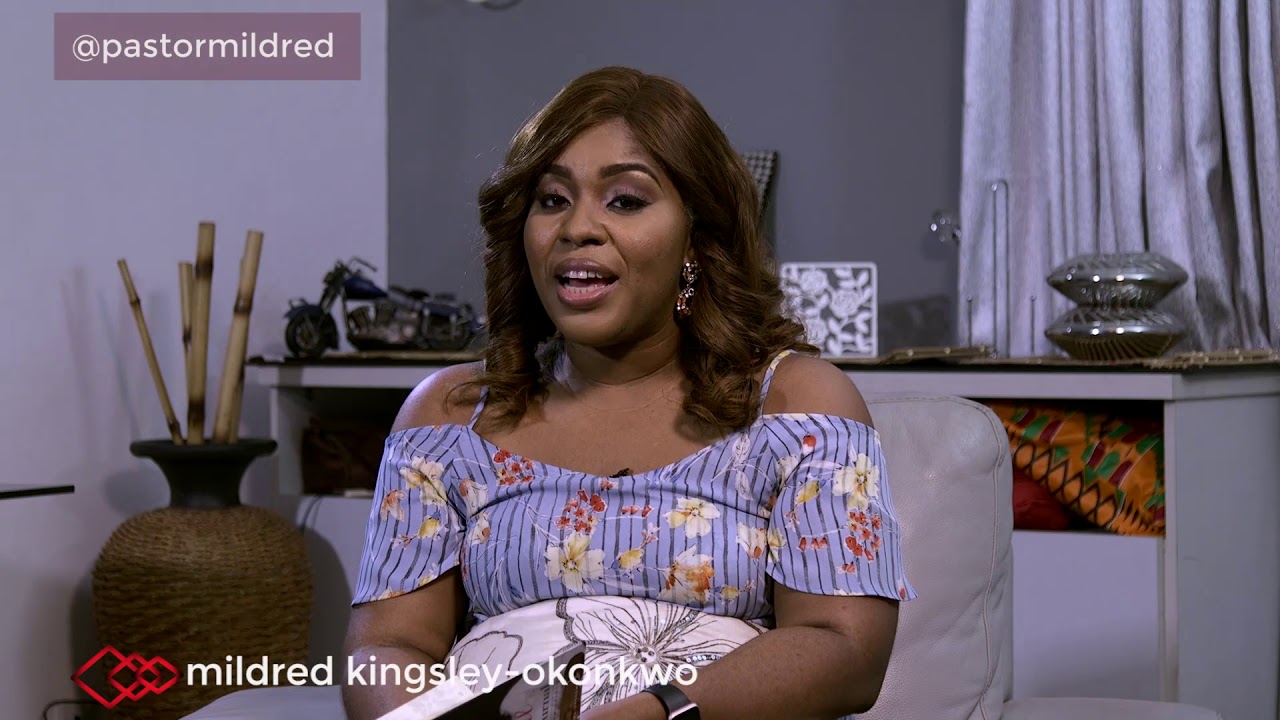 Mildred Okonkwo, wife of the Senior Pastor of Davids Christian Centre, Pastor Kingsley Okonkwo. The Renowned Nigerian Relationship speaker is the founder and convener of the JUST US GIRLS CONFERENCE which has attracted women in their thousands.

It is a ministry centred on helping women maximize their full potentials and get them to a point where they can stand out in their various fields.

Mildred and Kingsley are happily married and are blessed with children but in all of these, these soldiers of Christ has also weathered the storm at a point in their lives.

They went through trying times when they got married trying to have children all to no avail for about 8 years. Their marriage of over 15 years is today blessed with two children.

How did they go through those times and what led to the setting up of Hannah’s heart? a ministry for parents in waiting? This and many more where what pastor Mildred also spoke about in one of her interviews.

She also spoke about her personal experience and what women waiting on God for a child should do. She explained:

“Yes it took us eight years before I conceived. The waiting years? Hmm… I honestly think that what makes the difference on any journey is who we go with on that journey.

I always knew I would have issues conceiving even as a teenager. At 16, I was diagnosed with Poly Cystic Ovary Syndrome (PCOS) so once my husband proposed, I told him the doctors said I may never be able to have children. He totally ignored me and went ahead to marry me.

He told me “I’m not marrying you for children, I’m marrying you because I love you but you will have my children” and that to be honest with you was the last he ever mentioned the issue.

All through the eight years, he was very calm and kept reminding me to live in the now and enjoy just being the two of us as he was sure the children would soon come and we wouldn’t have so much “us” time.

I will be honest with you. I had my moments of crying and worrying and praying faithless emotional prayers that did me no good but I guess the turning point came when I finally settled down in faith. I actually just sat down and searched the word on this matter.

Once I got God’s promises to ME. I knew I was home free and it was only a matter of time. We got married in 2005 but I actually settled down in faith in 2008. I finally got it. So for the most part of 2008, I spent it trying to find out what God had to say about this matter. Promises barraged promises…

There are two nations in your womb. Two kinds of people shall be separated from your body. One will be physically stronger than the other (one will be male and the other female) “-(Genesis 25:23), “For your shame, I will give you double…you are having more than the child-bearing women” – (Isaiah 61:7; Isaiah 54:1), “You cannot be barren.

You cannot have a miscarriage and I will fulfill the number of your days (all your babies will be carried to full term)”- (Exodus 23:26), “Your children will be known all over the world as the ones Jehovah has blessed” –(Isaiah 61:9).

So I rested and believed. I began to live. I wrote them down and meditated on these promises and more. Said it to myself over and over till I could almost see the word become flesh. I shopped for my kids. Named them. Sowed seeds in their name. Gave gifts to pregnant women. Spread love. Spent time with my husband, travelled a lot with him both for ministry and leisure.

My husband’s family was amazing. I wasn’t under any kind of pressure at least no one spoke to me. I always felt loved and protected. My father-in-law whenever he called would tell me “Mildred, all will be well.” And the way he said it I wasn’t sure if it was directed at conception or our lives as a whole.

It was just a prophecy that I applied to conception. Initially, everyone must have been worried but I guess seeing our attitude to the whole thing they all just kept quiet and prayed. There wasn’t so much pressure from family and friends as there were from strangers.

Unfortunately, when you are in the public eye people feel like you belong to them. So I endured rumours, side remarks, sarcastic comments and constant “you people are still doing honeymoon?”, “when will you start having children?” Sometimes from total strangers.

If it wasn’t so annoying it would be hilarious. I felt like telling them, “I’m Nigerian. Nigerian women get married and have babies and if after five, six, seven, years I don’t have a baby then you should have figured it out by now….it’s because I can’t!” (laughs).

Like I said though going through this with Pastor Kingsley made it really easy. He was so calm and sure that the kids would show up. His confidence in God gave me strength.

I’m sure by now you would have discovered that the scriptures are very personal for me. I’ve shared a few but for me, the truth is there’s something about knowing that this particular scripture is my word for this season not just a general word but a personal note written to me from God. So I would really recommend studying and searching the scriptures for yourself.

I’m currently working on my book “My Journey To Motherhood” where I will share the scriptures that helped me but I honestly believe God has something to say to you as a person.

Take for example after I had two girls and I got pregnant again, I truly wanted it to be a boy just because I wanted both sexes and I went to seek God’s face and this is what he spoke to me through the scriptures… “Don’t worry, a stranger will not be your husband’s heir but a son from his loins” (Genesis 15:4)

I mean it’s amazing how personal the word of God can be. I knew there and then that I was having a boy. So, basically what I’m saying is go after the word of God like your life depends on it because after all is said and done it actually does.

TV Host, Agatha Amata Speaks Candidly About Her Former Marriage To Actor, Fred Amata, Her Divorce And Parenting Their Children

Carrying my babies to full term was my right. I also knew that I wouldn’t have just one child. One child can’t surround my table. This confidence came from finding it in the word by myself, meditating on it till I believed it with a depth of assurance that waiting an extra five years after this encounter could not shake.

I would also suggest going after materials, books, CDs, stuffs like that especially with Godly testimonies in them. Two books that really helped me were ‘You Shall Not Be Barren’ by Bishop David Oyedepo and ‘Supernatural Childbirth’ by Jackie Mize.

Confessing the scriptures you have found and written also helps which is why I really like Supernatural Childbirth. Also, get a good support system. Sometimes even friends going through the same challenge.

I was a part of a couple of groups on social media of some amazing women who were all waiting. We prayed together, encouraged each other and celebrated when anyone got pregnant because it encourages us that God was in our neighbourhood. Today most of us have babies.

I strongly recommend adoption but let me also say this, adoption is not a charm. It is not what makes you get pregnant. The beauty of adoption is that it gets you out of worry mode and that is important because worry or anxiety and faith don’t go together.

Faith also works by love. Once you become a mother and the truth is once you adopt a baby that’s what you become: a mother, your whole life changes. I became a mother long before I conceived my miracle babies.

We had always planned to adopt after having our biological children. We talked about it before getting married so once we got a chance to we did. My daughter is precious. Daring, bold, lively, strong, fun and very caring.

If I don’t tell you, you’d never know she was adopted and if not for interviews like this or people asking me questions about adoption, you would never know because we forget that I didn’t carry her in my womb. I call her my free gift baby, God’s gift of grace to me and she’s an amazing big sister too.

Too many women out there are crying for babies while babies are crying for mothers. Instead of feeling sorry for yourself, go out there and give love, spread joy and don’t do it because you can get anything out of it. Don’t do it for the magazines or newspapers just do it to be a blessing.”