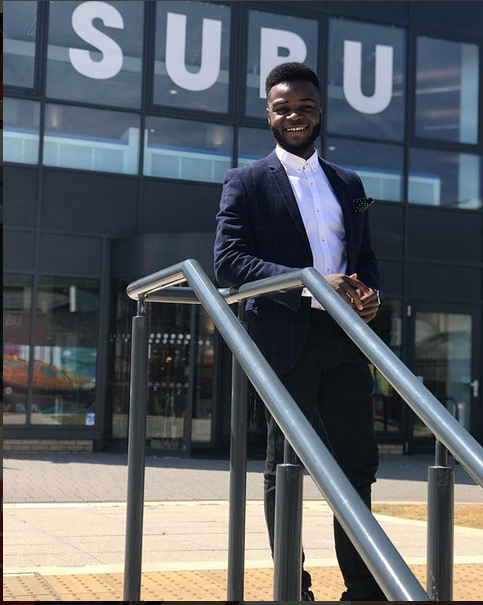 Why Tonto Dikeh’s Sister, Tatiana Dikeh Tried To Kill Herself

The first black Student Union president of Bournemouth University, United Kingdom, Daniel Yomi has come out as gay on social media and as could be expected, his declaration was unwelcome.

Daniel, a young Nigerian with a Christian background got a lot of messages and he has gone ahead to share some of them via Instagram.

The content of the messages he got varied with location/locality of the senders. The supportive and encouraging messages are mostly from outside his birth country; with the senders praising him for being brave and reassuring him of their love for him regardless, while the messages from Nigerians warned him that he can’t come back to Nigeria now.

Below is the full text of Daniel Yomi’s declaration:

READ ALSO:Charly Boy Responds To Those Who Criticized Him Over His Daughter&#8217;s Lesbianism Reveal

“Hmmm…
Where do I start ……For years I’ve been struggling with what I initially thought was a demon inside me or like some will call it, a disease. A struggle no one knew about except close friends who were either like me or allies I could confide in…and these included people in church.

As someone who was raised in a Christian home, I was nurtured by amazing parents who wanted nothing but the best for their last son aka ‘last card’ lol. They ensured my steps(and that of my siblings) were ‘ordered in the way of the Lord’. I was taught to be honest, forgiving and supportive…most of all, my parents gave me access to education.

We attended a conservative church every Sunday, one with doctrines that were aimed at not just preparing its members for heaven, but also live a ‘fulfilled life whilst on earth’.
I started from joining the children Sunday school to learning how to sing and play three different musical instruments(Violin, Flute and Keyboard), ..I was a senior member of the Choir and Orchestra and I loved every bit of it and was also loved by many because of it…in fact, this was and still is the best part of religion for me.

But in all of this, I was struggling with my sexuality and the worst part was there was no one to talk to about it. Having these type of feelings (within a religion that has always been used to dehumanise marginalised communities which included the lgbt community) was a taboo, an embarrassment and a huge shame. I remember crying in my room after every church service for God to change me, I’d prayed, fasted and even tried taking my life twice because of what people would say if they found out the son of a highly known preacher was gay…the damage to my family’s reputation…the shock for those who looked up to me and wanted to be like me...all hell would break loose. I was living for everyone else but me …I’d placed and valued the opinions of people who don’t even know me or cared about me over my life, happiness and overall existence.

I was also a recipient of many awards at uni for my positions, campaigns and service for students (my activism didn’t start here in the U.K. ‘e don tey’- only Nigerians will understand that lol)…however one of the interesting awards was the ‘Most Religious Award’ …won that award three times in a row I think …but yeah that award only made me feel ashamed of myself because it was awarded to people’s ‘idea of Daniel’…not who I truly was.

Fast forward to my graduation in 2013, I emerged the best graduating student in my department with a first.. then travel to the U.K. for my masters degree and the rest as they say was history.
Here I learnt that ignorance brings fear and hate ….while knowledge and exposure brings security and power. Don’t get me wrong, you can be knowledgeable and still be a bigot…but you get what I mean.

My previous role as a representative of over 18,00 students (both home and international) gave me the opportunity to engage, love and accept people who were different whilst being my authentic self. As humans, we’re sometimes defensive or even scared of things we don’t understand…things we will never understand because we aren’ t affected by them. The only way out is to unlearn our prejudices and learn to be accepting of others, if we truly care and want to get the best out of people.

It’s funny how some say I turned gay when I came to the United Kingdom lol…you don’t just become gay overnight(I wish I could turn straight tomorrow and live a ‘normal’ life) and being gay is certainly not a choice …while would anyone choose to wake up to death threats, or face discrimination all their lives. Anyway, that’s a lecture for another day.

Everything I am today started from my teenage days..this country only gave me the liberty that I deserved as a human being. Of course Britain still has a long way to go when it comes tackling all kinds of discriminations but the difference is as a gay man, there is no longer a law that will send me to jail for being me without causing harm to anyone.

We need to start having conversations about making our churches and homes inclusive for children who may not necessarily fit into the norms of society. Because whether you like it or not these children exist and will live their true selves when the time comes…with or without you.
For those calling me selfish for ignoring my family’s feelings and reputation, I find that ironic because for over 20 years of my life I was living for these same feelings and reputation whilst dying inside. I love my family and I’m confident of their unconditional love for me.
Coming out to them was the most difficult thing to do but I’m glad I did it. I’d rather they heard from me than a blackmailer.
I remember throwing my phone away after hitting the send button to that message. ????

I know they love me and I also know they need time. It took me over two decades to accept my sexuality and it’d be unfair of me to expect them to accept the real Daniel overnight. I’ve been on this journey and they have just started theirs…at least they now know who their true son is.

I always say this, the worst thing that you could do to someone you claim to love is to have them love an untrue version of you. So yeah, I came out to my family because of my love for them. That statement also goes to gay men in straight relationships/marriages…many in churches ..who are too scared because of what people or church members would say…”Abeg who church members epp?” (Again you’ll need a Nigerian interpreter for this Lol)

I don’t expect anyone to accept me …all I want is respect because I deserve it. For those of you sending words of prayers, I appreciate them but please pray the right prayer …pray for God to change the minds of homophobes and bigots so they don’t ostracise and dehumanise humans who are different to them all in the name of ‘God’ …because a prayer for God to change my sexuality is mere fallacy. This is who I am and the God I believe in wants me to be authentic and happy …not worship him in hypocrisy.

I do not regret my actions and won’t do things differently .. because the truth is, there isn’t a perfect way to come out as a queer person…especially if you’re of colour. Everyone’s story and journey is different. The only regret however is living in a world that criminalises or discriminate against people like me.

Thanks to those who have been supportive, I see your messages (obviously can’t reply to all) and I appreciate them. Whilst I’ll respect people’s rights to express their opinions about my actions, I think the deaths threats are unnecessary because they won’t work. I won’t be bullied or threatened into going back to where I came from.

I feel free and happy and if that doesn’t make you happy because of whatever reason (your ‘religion’ maybe?), then you don’t know me, you don’t love me and you don’t deserve to be called my friend or family. 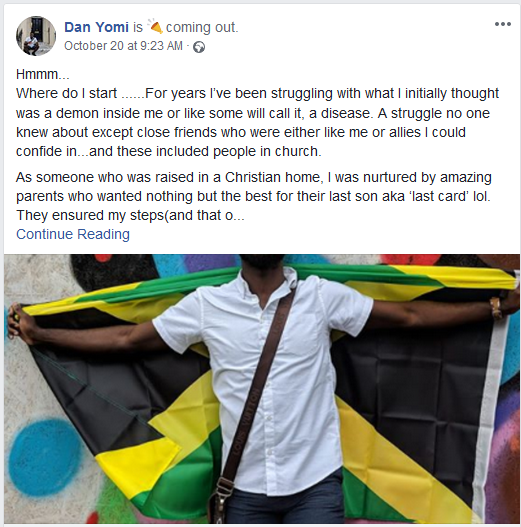 Below are some screen shots of the messages Daniel received: 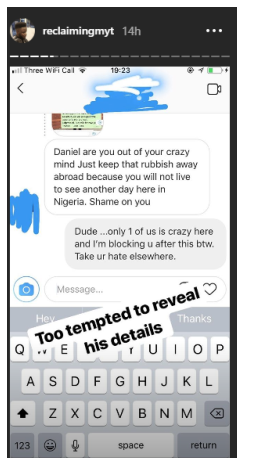 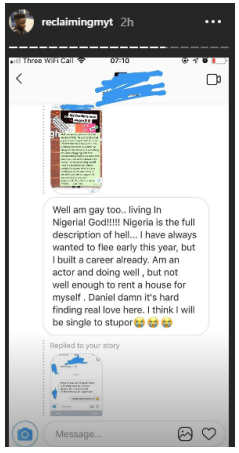 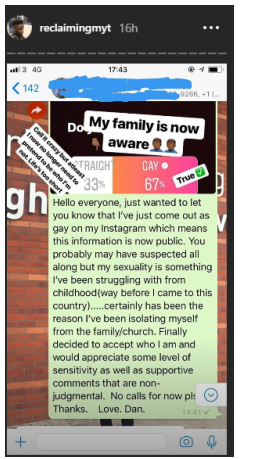 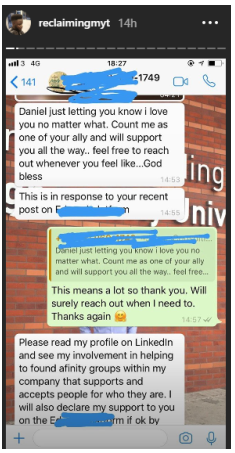 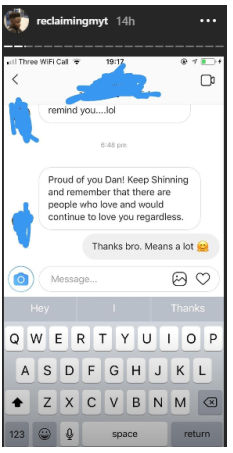 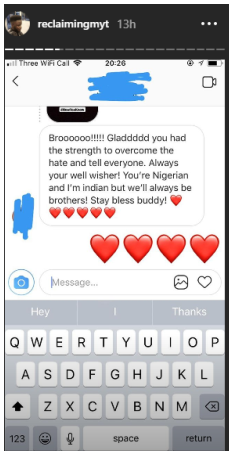 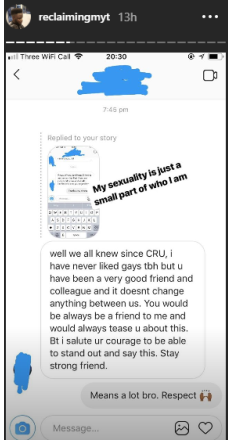 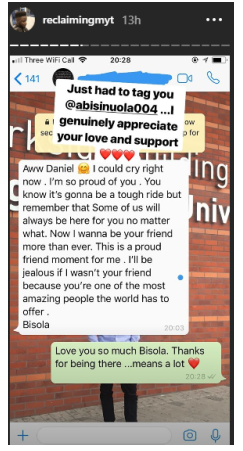 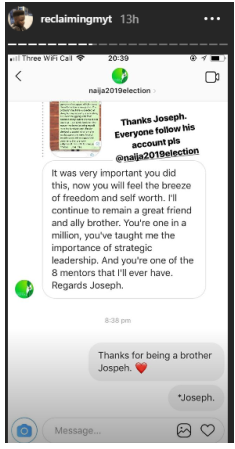 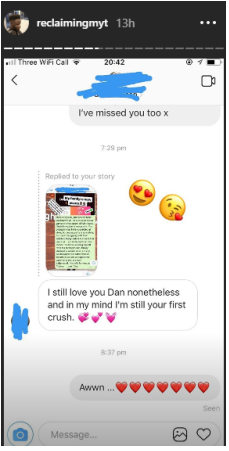 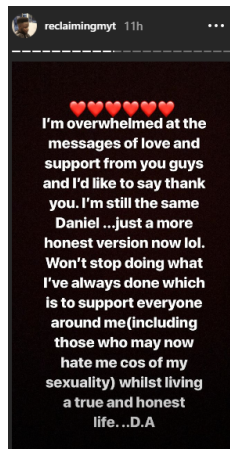 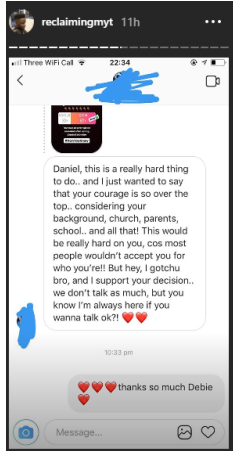 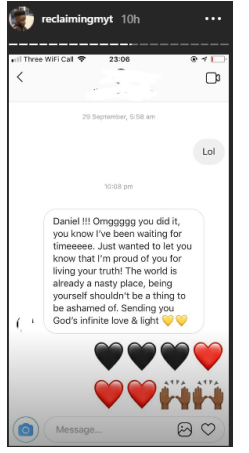 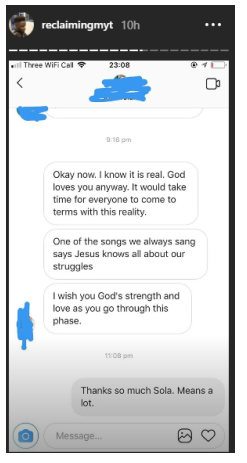 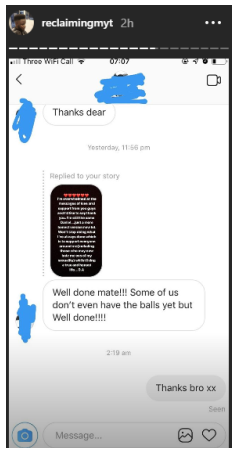 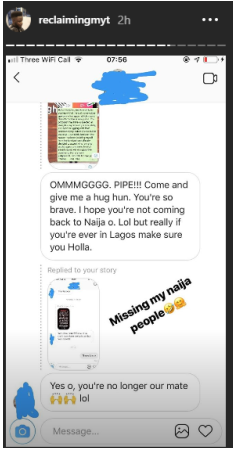 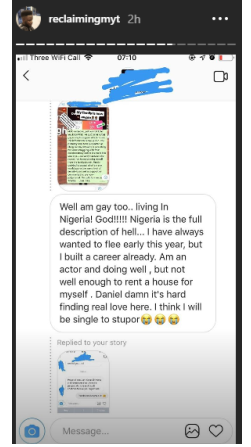 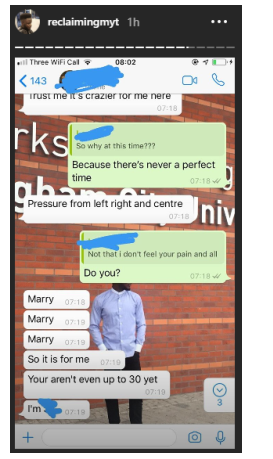 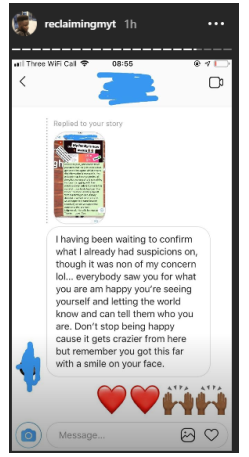 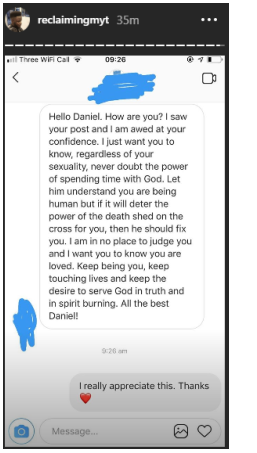 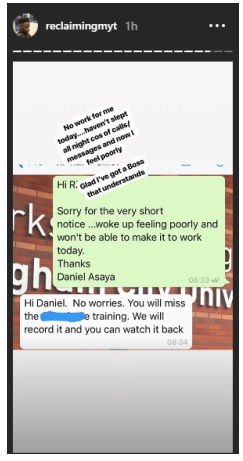 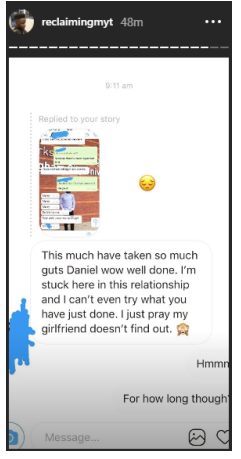