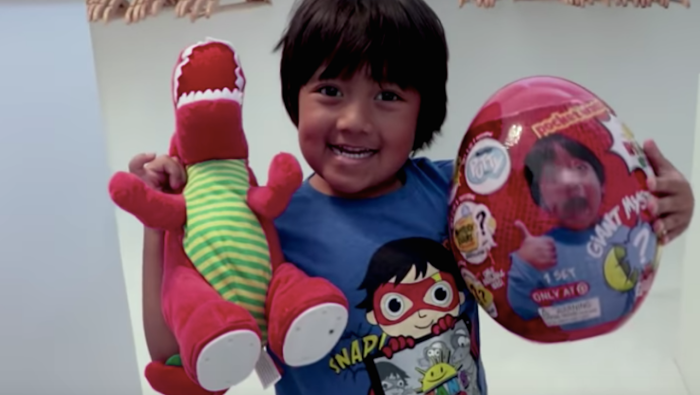 American business magazine, Forbes just released its list of top YouTube earners from June 2017 to June 2018, and at the top of the list is 7-year-old Ryan of the channel Ryan ToysReview.

Ryan, with the support of his parents, raked in an estimated $22 million from his toy unboxing channel, pre-taxes, after making $11 million last year.

READ ALSO: What Every Child Must Know About The Grey Areas Of Yes and No

Ryan who apparently was a fan of toy reviews since been younger asked his parents at about age four if he could make reviews himself, luckily, they gave it a nod.

Only to literally watch their son’s channel grow into an empire that now has 17 million subscribers and countless hits. And it all started with a viral video in which he plays with a lot of toy cars. It’s been watched a whopping 934,621,669 times!

It’s funny to think that while majority of adults are carefully budgeting their ‘considerable” salary, Ryan is pulling in eight figures a year by playing with toys in front of his parents’ smartphones.

While many toddlers are still getting small handouts from their parents for a pie or so , Ryan has bought his parents an enormous new house (which you can see in the background of his hundreds of videos).

In an NBC interview, Ryan says of himself , “I’m entertaining and I’m funny,”  — proving he totally gets his own brand.  It’s probably why millions upon millions of people can’t get enough as he plays with all of the newest toys and runs around having fun.

Ryan by all means appears to be a super sweet child and his parents are very much likeable also, and the family keeps their last names a secret for obvious reasons.

Ryan now has multiple advertising deals, including one with Walmart that launched last year. That deal includes a “Ryan’s World” toy line that sells the stuff he loves playing with so much, from mystery eggs to squishy toys to race cars. His brand also appears on t-shirts and toys, so that you don’t need a screen to see his joyful face.

READ ALSO: 10 Things You Should Know About Firstborns (Part One)

Even though, some of his money comes from business deals stemming from his fame, most of his income is simply from YouTube ads that play before his cute videos start.

More content creators who cater to younger generations, and videos that focus on toys, games, and video games are at the top of the list. That includes brothers Logan Paul and Jake Paul, make-up artist Jeffrey Star, and gamers Evan Fong, Seán McLoughlin, and Markiplier.

What value can you help your  Nigerian child share with the world to earn a spot on the Forbes list of kindergaten earners as happy toddler Ryan? Cheers.