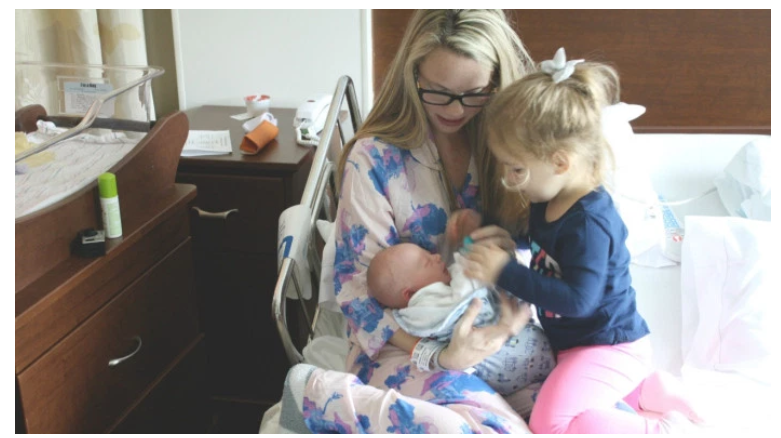 WATCH! How A US-Based Mom-Of-3 Dealt With Her Cheating Nigerian Husband Will Make Your Day

If it was in a school, this soul-stirring story shared by a mom, Rachael Bamas could be referred to as Motherhood 101.

When you have your first child and they hand you that baby, you think to yourself there is nothing in the world you could love more. Then you find out you’re pregnant with your second, and you assume the bond you shared with your first child cannot be shaken. Then you come home from the hospital, and you find yourself consciously protecting your new baby from your toddler; and by extension, changing focus and attention from her without meaning to.

READ ALSO: Nanny To The Rescue: How to Get Your Restless Toddler Fall Asleep Fast

Recounting her upbringing, the mom-of-2 talked about her own experience growing up as the first child of the family. She acknowledged a subtle barrier her mom placed between her and her younger brother, making it seemed she was the cause of everything that went wrong in their home.

“Why was it always my fault when something broke? Why does she still pour his cereal for him at age 25? Why was it my responsibility to set the example? Mind you, I did. I graduated high school with a 4.0 and went on to graduate college in three years. I did have a great childhood and have an amazing relationship with both my parents to this day, but that always loomed in the back of my mind. Then it all came full circle that day I brought my son home to my almost three-year-old daughter.”

Bamas gave an insight to her own struggle as a new-mom of a second child:

“I, of course, love both of my children the same, unconditionally. But, what no one warns you about having your second child is the frustration you will take out on your first. You expect your toddler to now act like an adult as you truly have a baby back in the house. I remember telling my daughter — you can get your own snack, you can put on your own shoes, you can find that lost toy. I would snap at her, my patience lacking from only getting a couple hours of sleep.

I would hear my son cry and immediately think my daughter had done something to accidentally hurt him or wake him (most of the time it was her waking him). I could feel this growing resentment towards her that I hated. She would be hanging off my neck while I had my son on my boob and I just wanted her to leave. I wanted that special time with my son and mostly I just wanted time to myself.”

READ ALSO: Tori Roloff Gets Candid About the Struggles of Motherhood In One Hilarious Photo. Do You Think You Can Identify With Her Struggles As A Mom?

“It was finally one day when she was acting out about something minuscule when I caught myself. Instead of yelling, I simply asked her, “What is the matter?” She turned to me with her beautiful blue eyes and said, “I just want you to hold me.” My heart sunk. I couldn’t even think about the last time I had held her. Her bedtime routine had been cut down to five minutes of YouTube Kids and a quick prayer goodnight for the past month, all while I rocked my son for what seemed like an eternity to get him to fall asleep. It was in that moment that for the first time I felt like I was failing at being a mom to two souls. I had to take down that barrier that was put up the day I brought my son home. I took her in my tired arms and held her. I could hear my son crying in the distance for his next feeding. My daughter let go and said, “It’s okay mommy, go get him.” I didn’t. I let him cry it out a little longer while I held my first baby.”

Rachael Bamas testified that somewhere in the midst of the chaos, she learnt to love her children together.

“Cut to a year later, and my daughter is the best big sister I could ever ask for. Those first three to six months with a new baby and a toddler do seem to drag on, but somewhere in the midst of the chaos your older child will see and learn the love you have for both of them. My daughter has stopped my son from choking on random items more times than I can count. She looks out for him, she plays with him, she loves him. It’s not always rainbows, but for the most part they are great together. I have learned how to break that invisible barrier down. And hey, even if I still snap at my eldest from time to time and expect more from her, there is a reason for it. I’m raising her to be a confident, successful firstborn woman. After all that’s why they say the oldest are more likely to be president, and every astronaut to go into space has been the oldest child.”