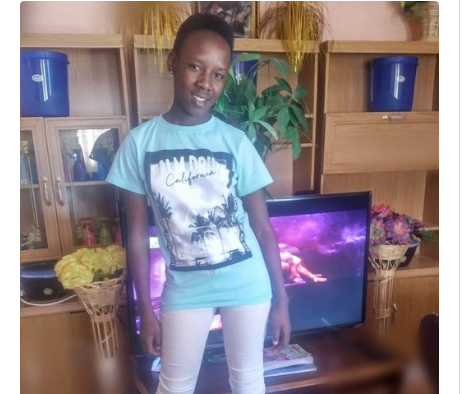 Issues of child molestation and sexual or carnal abuse are one that is ravaging many young children all over the world. Time has shown that most of this evil act is often carried out by someone close to the victim -family members, teachers, neighbours and so on.

A South African dad has taken to social media, Twitter to lament after his first child got infected with HIV/AIDS at the tender age of two.

According to him, his daughter was molested by her mother’s cousin. The girl’s mom was aware of the abuse. Rather than informing her husband about the situation, the distraught father explained that his child’s mother kept it a secret from them. He, however, found out later when his daughter was eight years old.

The heartbroken dad added that his daughter had already developed warts in her private area and she was denied of medical removal by a certain doctor at the hospital where they were using.

The innocent girl who couldn’t live with the feeling that she was raped and got infected in the process went into depression and had on many occasions wanted to commit suicide. The victim who was born on the 28th of September 2004 passed on on the 28th of May, 2019.

At the age of 2 ( Two ) she was raped by her Mother’s Cousin and got infected with HIV&AIDS, her mother kept it a secret until I found out myself when she was 8 (eight years old ), she even developed WARTS kwi Private Part, she was taking drugs.

She was denied of medical removal of WARTS kwi Private Part ..By A certain Doctor at Embhuleni Hospital, Elukwatini, Nhlazatshe, Mpumalanga Province.

I am broken! She had depression, would sometimes attempt to commit a suicide, I took her to the psychologists for counselling but she couldn’t live with the feeling that She was raped and got infected. Depression negatively contributed. Now My Angel, My Firstborn is no more.

I want to be involved in any Organisation that helps girls who were raped, who were abused! I would love to volunteer and change someone’s life, by so doing I will be making my daughter’s spirit happy.

Please someone link me through….. Please retweet and share this!”

Sexual abuse cuts across social class, age, culture or creed. It is now clear that child sexual abuse can cause serious or irrepairable damage to the life of the victim and also shatter the parents for life.

While there is no sure-fire way to protect one’s child from this menace, steps can be taken to prevent and curtail the danger.

1. Prevention is staying in tune with your kids and preparing them. Give them age appropriate lessons about sex from time to time. Make sure they know appropriate boundaries with their bodies and touch, what is allowed and what isn’t, and from whom.

READ ALSO: Nigerian Woman Calls out Family Doctor Who Sexually Molested Her Since She Was 11

2. Teaching them to say NO. Through role play, show them how to say “no” and what to do if they find themselves in such situations. Make sure they know they have a voice, and that you will listen to it.

3. Be a nurturing parent. Children need to know that they are special, loved and capable of following their dreams. Learn about how children grow and mature and have realistic expectations of what your child can and cannot do.

4. Listen to your children. It is often difficult for sexual abuse victims to talk about what happened to them. It may also be difficult for parents to believe their children if the suspected attacker is someone close to the family. However, do not ignore or discredit the child’s account of what happened.

6. Sending a girl child on errands to a male should be curbed. At night, children should not walk alone and should avoid poorly lit areas at night. Walking in well-lit areas with groups may discourage sexual predators from attacking.

8. Know who your child is spending time with. Coax your child to divulge details of what they do together.

9. Get involved. Advocate for services to families.