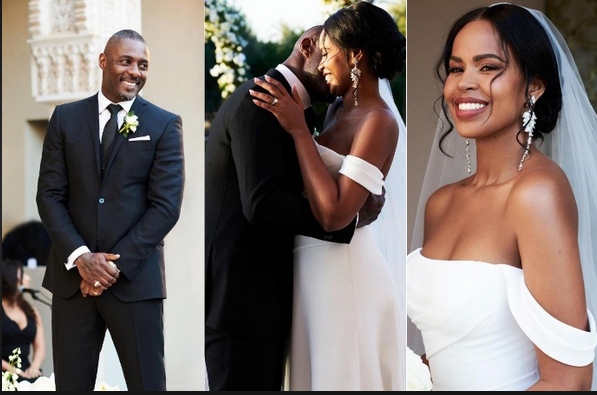 Idris Elba is over the moon after marrying model, Sabrina Dhowre. While on Tuesday’s segment of The View the Hobbs & Shaw actor, 46, shared some details about the night he first met his now-wife, Sabrina Dhowre Elba – and apparently, there were fireworks from the start.

The twice divorced dad-of-two went on to reveal that it was “love at first sight” when he met Dhowre at a party venue in Vancouver. He was filming his 2017 movie “Mountain Between Us” with co-star Kate Winslet at the time.

The lovebirds got engaged in February 2018. Elba said during the interview:

“It was love at first sight. I went out on my only day off, true story, it was a Sunday night, I went to this party and there she was. The rest is history.”

During the sit down interview, co-host Sunny Hostin joked that “so many people were in mourning” when it was announced Elba had tied the knot. “I myself wore a veil,” Hostin joked.

Elba noted that while he has publicly said in the past that he wouldn’t get married again, meeting Dhowre Elba “opened” him up. He added:

“I’m actually the happiest I’ve been in a long time.”

As for what makes Dhowre “the one,” Elba told PEOPLE in November they have “good chemistry.” He said:

READ ALSO: Idris Elba Reflects on How His Father’s Death Affected Him

Elba and Dhowre wed in a stunning ceremony in Marrakesh, Morocco, in April. The actor told British Vogue the morning of their wedding that he and Dhowre Elba, a former Miss Vancouver, were “inseparable” after they met.

The actor also spoke about his daughter, Isan, 17, who served as the Golden Globe Ambassador in January. (He also has a son, Winston, 5, from a separate relationship.). Elba gushed:

“She did really good. She was very nice. She’s not shy, but she’d never done anything like that. I was very proud of her.”

As for what she wants to do in life, the cool dad said before jokingly waving an elbow to the side: