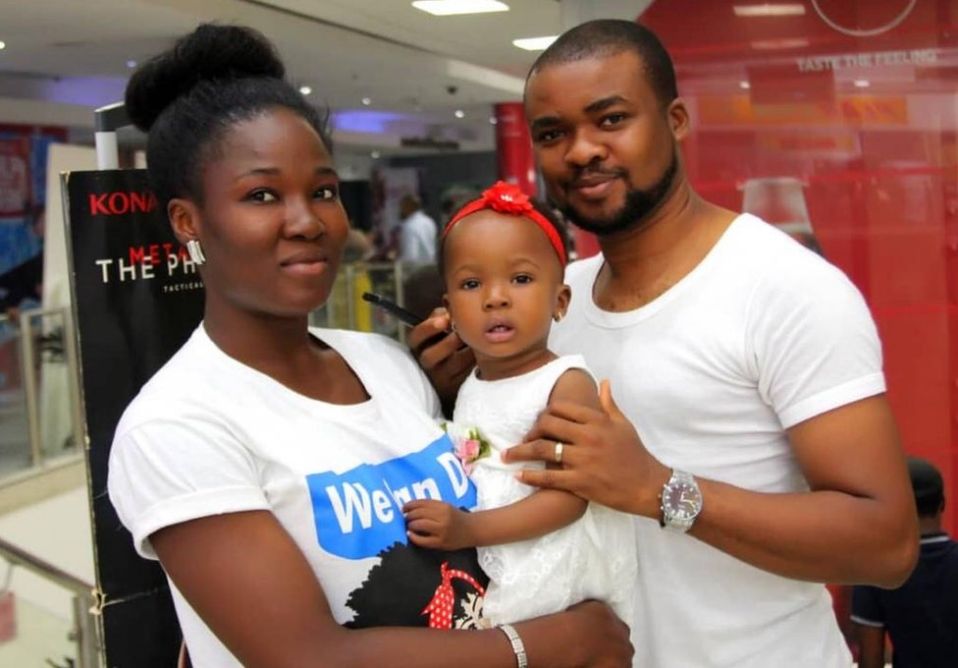 Experts: Here’s The Best Exercises To Fight Depression & How Much You Need Each Week

A grieving widower, Andrew Gift, has opened up in an interview with BBC, the agony of losing his dearest wife to breast cancer in November, last year. Grace Gift was just 33 when she passed on leaving behind a 3-year-old daughter.

Grace’s story is sad and unfortunate. As we know, most Nigerians are very religious, and when it comes to health issues many prefer to seek help from places of worship rather than the hospital.

By the time they get to the hospital, they are presenting with advanced disease, which is likely to lead to death.

According to Grace’s husband, Andrew Gift, she would still be alive had she got treatment on time. After she was diagnosed with cancer three years ago, she abandoned the doctor’s advice and sought the help of a religious healer.

Read on as Andrew detailed his horrible journey to widowerhood…

My journey to widowerhood began three years ago in an oncologist’s office in Nigeria’s capital, Abuja.

Had my wife, Grace, followed the doctor’s advice rather than seek the help of religious healers, I believe that she would have survived breast cancer and still be with me and our three-year-old daughter.

She had gone for tests on a large lump on her breast and the doctor said they had revealed that there was an “invasive carcinoma”.

I did not understand what this meant and he explained that “the tumour is cancerous and we need to begin the process of managing it immediately to avoid a spread”.

Grace looked fearful and weak, and I remember taking our baby – who was then just one month old – out of her arms as I was afraid of what she might do next.

There was a solution

But the specialist assured us that with treatment she would survive. He advised a course of chemotherapy and then possibly a mastectomy, or surgery to remove her breasts.

Through the fog of that day I tried to hold on to that idea that a solution was possible and that I would still have a life with Grace, who I had only started dating just over a year before.

We first met in the unromantic setting of a hectic bus terminus in Abuja. She was having a row with a bus conductor who had overcharged her for her luggage and I went over to calm the situation. We ended up chatting on the journey and then exchanging numbers.

I was 33 at the time and feeling very lonely. As the eldest son, I was constantly being reminded that where I come from in eastern Nigeria, the tradition is to marry young and my junior siblings had already beaten me to it.

Nevertheless, I waited a few months before I got back in touch with Grace and discovered we lived close to each other. We became very close friends and then agreed to marry.

But 13 months on from our wedding came the cancer diagnosis.

There is no free cancer treatment here and Grace’s medical insurance would not cover the costs, so I had to make plans to borrow the money.

My worst ever decision

But on my way to the pharmacy to buy the first set of chemotherapy drugs, Grace called to tell me that she was not going to proceed. Rather she had faith that God would heal her.

She told me that the chemotherapy would kill the healthy cells in the body as well as the cancerous ones, and she preferred to put her trust in religion. It is true that the drugs can damage healthy cells, but experts say this damage does not usually last.

I tried to convince Grace to change her mind, but it was made up and I felt compelled to agree to seek alternative solutions – the worst decision I ever made. 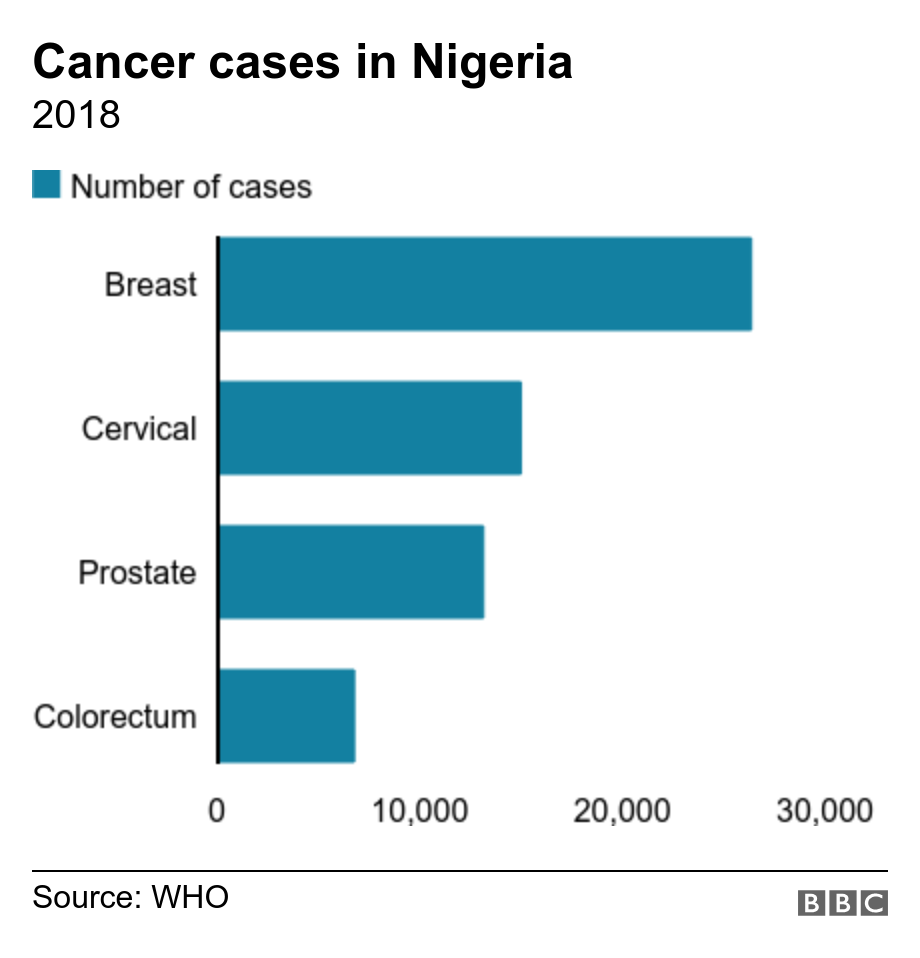 Grace’s decision to refuse chemotherapy was informed by the advice she received from friends and family. Many here believe that it can kill you and Grace got scared.

She did agree to have an operation to remove the tumour but this was a temporary solution as the cancer returned in a very aggressive manner. 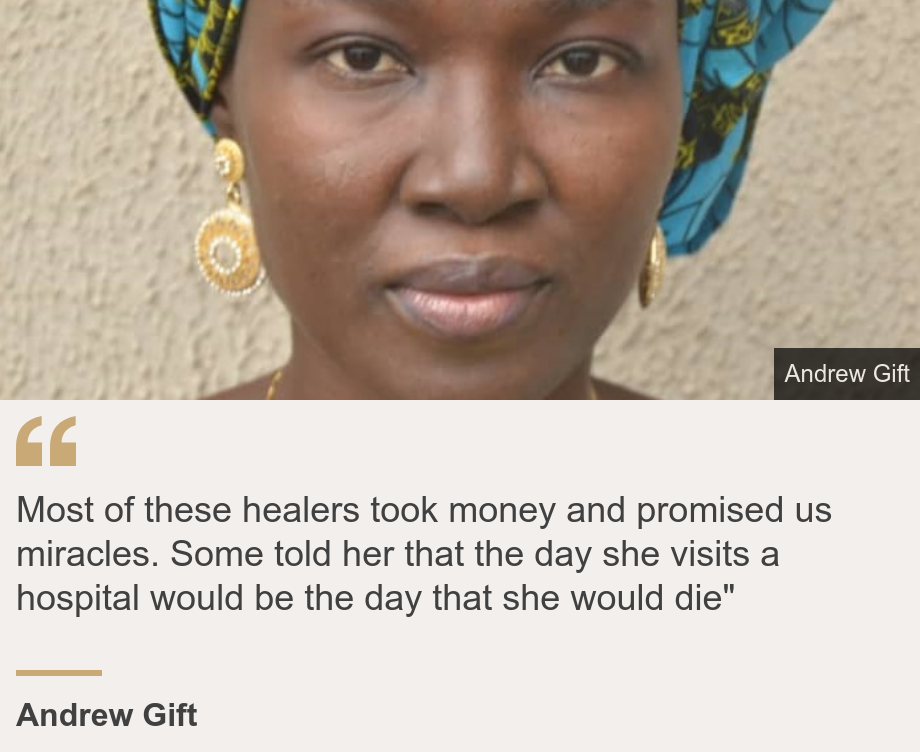 My wife was a very strong woman and she bore the pain for two years without seeing a doctor.

We did however visit churches and prayer centres, including that of the famous prophet TB Joshua, yet no solution came.

Most of these healers took money and promised us miracles. Some told her that the day she visits a hospital would be the day that she would die.

We also explored traditional treatments, recommended by friends and relations.

Not allowed to mention the cancer

We prayed together and did regular exercise, she took herbs and fruits, and denied herself some other foods and yet the pain did not end.

I tried to convince her to talk to a doctor, but she refused. Even when she went to get treated for malaria in the hospital, she insisted that I did not mention the cancer.

By June last year, it was obvious that she was losing weight and was becoming weaker.

Then in July, her health had deteriorated so much that I had no option other than to take her to hospital as she was struggling to breathe and unable to stand up.

The first two hospitals where I tried to get her admitted would not take her on, but a third one agreed to manage her case.

How can you spot breast cancer?

The most common sign of breast cancer is a lump or thickening in the breast – but there are other symptoms too. They include:

These symptoms can be caused by other conditions, so it is important to get any lumps or changes checked by a doctor.

Tests confirmed that the cancer had spread, including to the second breast, her lungs and her bones. And the doctor told me that there was no treatment that could save her.

Chemotherapy was recommended to manage the situation and Grace accepted this. But between July and November she was in and out of hospital on a regular basis.

At times, I lived in my car that was parked in the hospital grounds. When I woke up early in the morning, I would wash in a place hidden from view and then dress and go to work from there.

At that point, although she was distraught herself, Grace’s mother gave me a lot of support.

Often when I was working, the doctors would call to tell me that Grace was having a seizure and I would have to rush to the hospital.

I fell into debt in order to pay for the hospital bills, but I wanted to make sure that money was never going to be a reason for poor medical treatment.

I could tell that our daughter, Princess Gold MmesomaChukwu, who was staying at a friend’s house, was also suffering and she missed the warmth of her mother’s embrace.

I did take her to the hospital once, but I could tell that she was very disturbed and she was not sure how to react to the situation.

Finally, in November Grace’s painful headaches indicated that the cancer had spread to her brain and she went into a coma and never woke up.

She died at the age of 33. Tasting the sweetness of marriage and then losing it like this was very painful.

I am now lonely, depressed and find it hard to concentrate. There are tears every day.

I started a Facebook page in Grace’s memory and to try and raise awareness about cancer, as it seemed to me that many in Nigeria did not know much about it.

People need to be better informed about the best means of managing the disease and more money needs to be spent on getting this message across to ordinary people.

I still hear stories, including that of the wife of a friend of mine, of people refusing chemotherapy in favour of religious healing.

Yes, religion and our traditions still have a very big role to play in our lives, but that should not come at the cost of losing a love one.