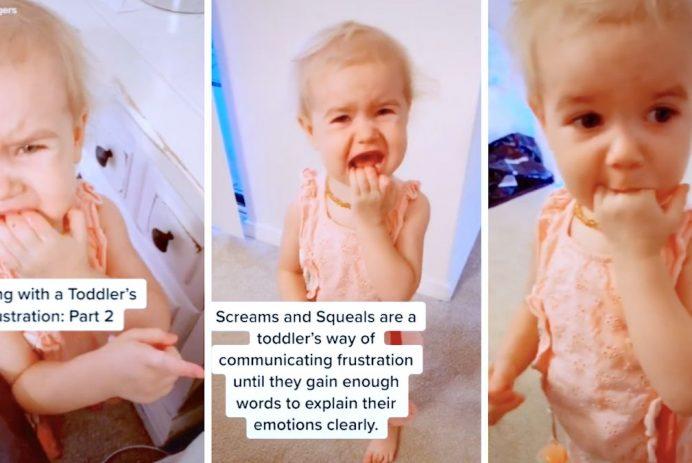 Rachael Rogers (@rachlynnrogers) demonstrated her genius step-by-step process for stopping her toddler from throwing a tantrum!

Tantrums are common with toddlers. One moment they are happy and playing, the next moment they are screaming and rolling on the floor when they aren’t getting what they want.

Tantrums test us as parents. Estimates suggest that up to 90% of toddlers have them, and researchers also have a pretty clear grip on why, like right down to the nitty-gritty neuroscience of it all.

This TikTok parent is a mom who loves sharing parenting videos and advice on TikTok.  Rachael has a daughter who, like many toddlers, sometimes throws tantrums when she doesn’t get what she wants.

In one video, Rachael filmed herself diffusing one of her daughter’s tantrums, and shared her method for stopping tantrums before they start.

Rachael’s secret? Being a good listener! The video begins with Rachael’s daughter attempting to reach for a smartwatch that sits atop a dresser. When Rachael tells her daughter not to touch the watch, the toddler begins to scream and cry.

In a caption, Rachael explains,

“Screams and squeals are a toddler’s way of communicating frustration until they gain enough words to explain their emotions clearly.”

Immediately, Rachael begins to employ her tantrum diffusion process. First, she kneels down so she can speak to her daughter at eye level.

“I understand. It’s super frustrating,” she says. “Can you talk about it?”

Hearing the calmness in Rachael’s voice, the toddler immediately begins to settle down. She stops crying and grabs Rachael’s hand to bring her over to the smartwatch.

“Yes, I know exactly what you want, but we have to keep this right here so that it can charge, okay?” Rachael replies.

In a caption, Rachael explains that the best way to diffuse a tantrum is to “explain the situation clearly and then offer an alternative option that you know they might enjoy.”

“Would you like to go swing outside? Does that sound fun?” she asks her daughter.

The toddler nods, quickly losing interest in the smartwatch when presented with another appealing activity. She even begins to giggle as she leaves the room with her mom.

The video ends with a shot of Rachael and her daughter on a swing set together, both smiling happily at the camera.

ALSO SEE: Yale Experts Share Some Strategies Parents Can Adopt To Manage Toddlers Tantrums — Once And For All

Viewers were impressed by the way Rachael kept her cool and prevented her daughter’s tantrum.

“I really applaud your ability to maintain your cool. You are an amazing mother!” one TikToker commented.

“Thank you so much! I am planning to have kids and this is so helpful,” another viewer wrote.

Another great way to prevent a tantrum? Do exactly what Rachael did and just stay calm!

Tantrums are incredibly common for toddlers. To prevent them, experts recommend being consistent, praising good behavior, and giving them choices. Small things like setting a regular routine or giving a bit of positive feedback can go a long way towards reducing the frequency and severity of your child’s tantrums.