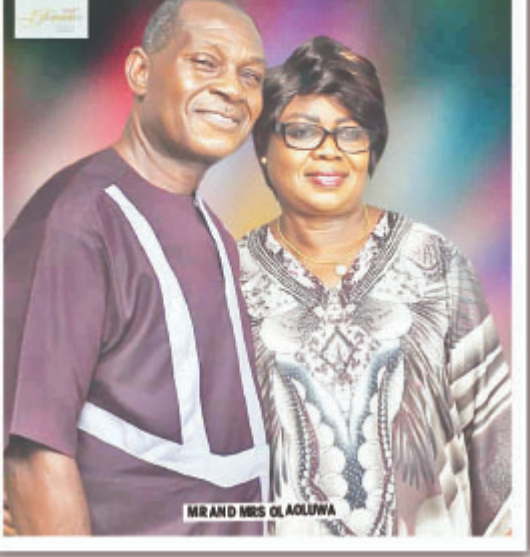 Mr. Nathaniel Olaoluwa, and his wife, Susan, are elders at the Living Faith Church, aka Winners Chapel, Ibadan. They believe that it takes a lot of effort from both spouses to build a good home where everybody is happy.

The duo who hail from Ogbomosho, Oyo State, and who have been married for 43 years, grew up in different parts of Northern Nigeria. While Elder Nathaniel was born in Jos, Plateau State, Susan was born and brought up in Keffi, Nasarawa State.

In this interview with DailySun, they recommend, among other things, emotional investment in tolerance, patience, humility, forgiveness, mutual communication, transparency and selfless care for each other as some of the things that can make a marriage succeed.

Their pieces of advice come as something worthy of note against the background of turbulence in the marriage of some Nigerian celebrities in recent times.

They include: Paul Okoye, formerly of the P-Square music group fame, and his wife, Anita, and TuFace and his wife, Annie. But in all, their advice serves as a welcome instructive footnote to all marriages, whether that of the famous, the less famous or even the totally unknown.

Can we have brief details about your background?

Elder Nathaniel:  I had my basic education in Jos after which I joined my father in his business. After gaining enough experience, I got a job with a businessman and worked with him for eight years before starting my own business.

Madam Susan: I am the fourth of the five children of my parents. I had all my education in Keffi, Nasarawa State. When I became older, I went to a Teacher’s Training College. I taught in private schools for many years, before landing a job with the Federal Civil Service. I have three children and a number of beautiful grandchildren.

Elder Nathaniel:  I met my wife at her auntie’s house. Her auntie was my boss at the time. Her beauty struck me at the moment I saw her. I made a decision to make her my wife. We exchanged pleasantries and started talking, and gradually we became acquaintances. We worshipped in the same church, and one Sunday after service, I summoned up the courage to let her know my feelings for her.

Madam Susan:  After my graduation from the Teachers’ Training College, in Nasarawa State, I went to Jos, Plateau State to teach. And, during that time, I lived with one of my aunties. That was how I met my husband.  We attended the same church, so we saw each other a lot. It was after one of the Sunday services that he proposed to me.

Elder Nathaniel: Her beauty! She was very beautiful, and I discovered that she is cultured and friendly. She was equally prim and proper.

Madam Susan: (smiles) He is handsome. I think his good looks actually attracted me to him, the very first time I saw him. Apart from his charm, I later noticed that he was well behaved.

When you proposed what was the reaction?

Elder Nathaniel: When I proposed to her, she actually said no. But I was deeply in love with her. So I didn’t accept the outcome. I made up my mind to continue to woo her until she gave in. My persistence paid off and I am glad I didn’t accept defeat.

Madam Susan: Even though I was attracted to him, I still said no to his proposal. I wasn’t interested in a relationship at that time. But he wasn’t the type to take no for an answer. He kept stalking me and when I couldn’t resist him, I gave in. And, that was how the wonderful marital story started. It’s been a beautiful journey of our togetherness.

What were some of the issues that you encountered in the early stage of your marriage?

Elder Nathaniel: We had several challenges like every other couple because of our different backgrounds. But later, we learned to respect and understand each other’s opinions. It wasn’t an easy job but we were determined to build a home filled with love and peace.

Madam Susan: The major issue we had then was the communication gap. That lack of communication and understanding posed some challenges initially. We realised we didn’t know each other as we had thought. But we were determined to make our marriage work. However, we consciously began to work on it. In no time, we learnt how to accept our differences, adjust to our new roles and set our own marital rules.

It’s been 43 years together. What year did you tie the knot and what lessons have you learnt from your marriage?

Elder Nathaniel:  We tied the knot on 19th August 1978 and since then I have learnt to be patient, humble and very understanding. There is no “I” in marriage but only “we.” As the head of the home, a man must work hand-in-hand with his wife to build their home and not just leave it to her.

Madam Susan: We have learnt a lot of lessons since we got married 43 years ago. The first one is about communication. It was after marriage that I discovered that if we didn’t talk to each other often on issues about our marriage, we would have lingering issues.

Communication is a major key to a marital relationship. It is very important. Tolerance is another thing we learnt. Couples must lovingly tolerate their differences and work and avoid fighting over little things.  Also, a family that prays together stays together.

SEE ALSO: ‘It’s not my responsibility to make my wife happy” – Will Smith Once Again Shares Nuggets on Marriage

What are your tips for a successful marriage and how do they help your own union to thrive?

Elder Nathaniel: Tips for a successful marriage that helped our marriage include love, kindness, patience, humility, care, and transparency. We ensured that the union is solidified through our efforts and God’s grace.

Also, we don’t keep secrets from each other. We speak the truth, open up and apologise to each other whenever there are grievances. No matter how bitter the issue is, we resolve it.

We think about how the other person would feel. There are times we disagree. But we ensure that the challenge does not stretch more than necessary and begins to cause friction and uneasiness at home.

Madam Susan: The serenity of a home is very important. We learned to love, care, tolerate and accommodate each other. I submit easily because of our marriage union.

Also, I humble myself, though we correct each other in love and try not to repeat always what the other spouse frowned at or corrected. Marriage is not a competition.  Most importantly, study the word of God and pray together.

There is an increased rise of violence in most marriages today. What lessons can the younger generation learn from the older generations like you?

Elder Nathaniel: They need to be patient with each other and learn to respect one another. Interactive communication is an integral part of the marriage relationship. They should never allow any issue to remain unresolved before going to bed.

Never allow any disagreement to degenerate to a physical one where couples have to fight dirty. Each spouse should learn to say, ‘I am sorry.” It’s a magical statement that can resolve many issues in marriage.

Madam Susan: Violence has no place in marriage and should never be tolerated. Learn to diffuse a tense situation by walking away or simply keep quiet. You don’t have the last word all the time.

That is the mistake some spouses make, especially the ones who are not ready to adjust to ensure peace. Be communicative. Be patient. Forgive more and be open to each other. If they can imbibe these principles, the principles will help.

What is your view on divorce, and as couples, what do you think is the solution to marital turbulence?

Elder Nathaniel: Divorce is very bad.  As human beings, we need companionship. So marriage is a union ordained by God to take care of that. God set the standard in a family, so every couple must work together in order to build their home.

Madam Susan: I am totally against divorce. It is better to settle any problem amicably. God is against it and I believe with understanding, and if couples treat each other well, no issue would degenerate to that level. They should resolve issues without using violence.

How can couples prevent violence in their marital relationship?

Elder Nathaniel: Men should understand that women are not as strong as they are. So no matter the argument, they must learn to control their anger. It is okay to be angry but self-control and wisdom are truly necessary. A real man will never raise his hand to hit his wife.

You know, some women can nag, and provoke a man to reach his limit. Yet, violence should be avoided in marital relationships. This does not speak well of the couple.

A spouse can be going through some periods of misbehaviour; the other spouse should be able to tolerate it. Humility, understanding, respect, and love are very important in marriage.

Madam Susan: Forgiveness is vital. This is because misunderstandings and arguments are bound to happen in every home. But the ability to apply wisdom to handle the situation will help a lot. Women should equally tame their tongue; some of them have razor tongues.

Couples should learn to express love to each other, and not do what they know would hurt their spouse. Avoid arguments and any form of confrontation, especially using weapons of war. They should also be praying together always.

What pieces of advice do you have for younger couples that can ignite the fire of love, and help to make their marriage enjoyable?

Elder Nathaniel: I would suggest they do things together and be open. No secrets. This is because when they have secrets, they might affect the way they relate to each other. They should learn to say,” I am sorry.” This may sound foolish. But that act of ‘foolishness’ can save their home.

It doesn’t mean they are fools. Apologise if your spouse says you are wrong. They should not sweep conflicting issues under the carpet. Discuss it and come to an agreement on how to handle a similar matter in the future. That would prevent issues from building up.

Madam Susan: They should love each other unconditionally; reduce their love for material things as well as be in the closest relationship with each other. They should be best friends and put each other’s interests first.

Offences abound in every relationship but some couples don’t know how to forgive their spouse. How can they manage toxic environments? They should not discuss their matter with friends and families but present them to God Almighty. Teamwork makes the dream marriage; it takes the efforts of both spouses.