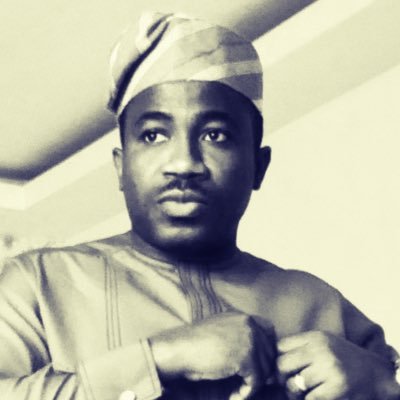 A Twitter user, Eyitayo has shared his thoughts on how parents are unknowingly contributing to their children’s marital stress.

Eyitayo said he formed this opinion after a conversation he had with his female colleague who informed him that she cooks for her family every day.

The Twitter user said he was quite surprised that a working-class lady with two children, a 10-year-old male, and a 7-year-old female, still cooks every day, preparing freshly made meals for her family every other day.

He said his colleague informed him that while her daughter helps out in the kitchen, her son is left alone to read his books and do other things that interest him.

Faulting the approach of his colleague, he said she is only positioning her son to find fault in his future wife if she is someone that wasn’t trained to cook fresh meals every day.

According to him, as much as the boy likes eating freshly made food, he should be made to participate in the process of making such meals.

It was a thread rich in arguments and has gotten the attention it needed.

“A while ago, I was chatting with a Female Colleague at work. She mentioned that she cooks EVERYDAY. Her family doesn’t eat stale food. She has 2 kids. A 10-year-old boy and a 7-year-old girl. I kept thinking about what she said for sometime as I became uncomfortable.

Honestly, I didn’t think that there were still women who cook EVERYDAY. In 2022! So my brain went on overdrive.

I asked her: “Have you started teaching your son to work in the kitchen?”

She said: “No na. But my girl has started doing the dishes and helping when I’m cooking”

ALSO SEE: ‘A Man Who Can’t Cook Is An Open Target For The Devil’ -Nigerian Pastor, Shola Adeoye Explains As He Addresses Parents

SEE ALSO: Married Nigerian Man Gives Wise Counsel To Couples As He Shares Conversation With A Man Who Told Him He’s ‘Spoiling’ His Wife Because He Didn’t Force Her To Cook 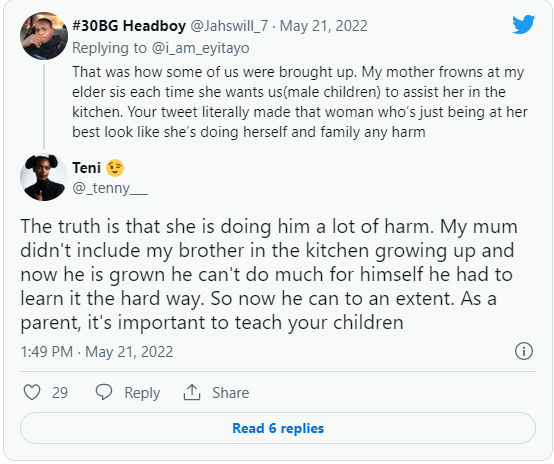 That’s how they start dear. I met a family like that, the mother-in-law is in charge, and she made the boy believe that house chores and cooking are only a woman thing, I then look at her only son that’s well above 50 and is so proud to say that he doesn’t know how to on gas that his mother has been following him all his life.

This guy, there is a place for you in heaven. Very wise. Women teach their boys so that when they grow up they will help their wives. I will tell you, any man who is helpful in his home can never be unhappy. If you get 20% or your wife before, you will start getting 80%.

Don’t complain about your husband today and then allow your son to grow up exactly the same way. If your son is helpful and useful in your house. Your daughter-in-law will be your best friend, trust me.

If you teach boys to do girl things and girls to do boy things, a time will come when men won’t need wives and women won’t need husbands. Why will I need a wife if I can cook, clean, and do every domestic stuff that a woman could be doing for me? Let’s be real. I believe God designed things in a way that we will need each other but modern people with their ‘I too know’ attitude is about to ruin everything.

I remember a young unmarried adult man I used to work with. All staff went on a luncheon and the dude sat on his seat while everyone else went to get food at a buffet table. Many had eaten and were leaving when someone asked why he didn’t get food.

He said he didn’t know how to serve himself because his mum and sisters were the ones who served the men in his family house. These things are really happening my people. This is a man who will judge a woman and condemn her cooking, yet he can’t even lift a serving spoon and choose what he wants to eat by himself. Train your boys to be independent men oooo!

Nobody has the right to tell someone’s wife what to do. Do what works for you and mind your business. The woman’s husband won’t be happy knowing that one foolish man somewhere has taken an interest in his family matter and is talking about it online.