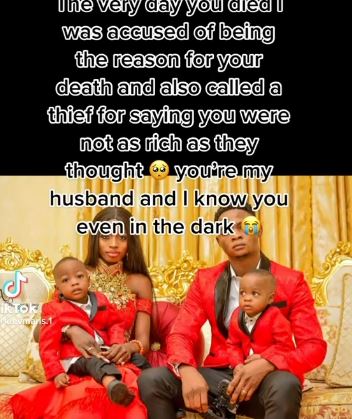 A young widow has taken to TikTok to narrated all she’s been going through in the hands of her husband’s family since his demise.

The TikTok user @kleivmaris.1 who shared a montage of her and her husband on the platform, revealed that she was accused of killing her husband and also called a ‘thief’ for saying he’s not as rich as his family members felt.

The mother of two also disclosed that she got into a fight with those her husband trusted the most, a month after his death, and she and her kids were chased out of his house for refusing to engage in a “diabolic plan”.

She went on to reveal that her late husband’s properties were taken away and those behind the takeover told her to go and marry as they only know her children and not her. She further disclosed that they said they’ll hold on to the properties till her children grow and come for it.

The TikTok user added that she and her children were shut out of her husband’s grave and told never to come near it again as they are allegedly disturbing his spirit.

Furthermore, she revealed that after she tried returning her bride price following the issues that came up after her husband’s death, her father-in-law told her to give the money to her late husband’s spirit.

She concluded by saying that she had to relocate with her two children to start life all over, and they doing fine and happy by themselves.

SEE ALSO: Why You Should Never Marry A Man Whose Mum Or Sisters Do Not Love You | Clergyman, Soul E Addresses Single Women

“Update on things since you left to heaven. A month after your death I had a huge fight with those you trusted with your life the most. Your wife and children were chased from your house for refusing to engage in their diabolic plans for our children and also I was robbed by those closest to us.

The very day you died I was accused of being the reason for your death and also called a thief for saying you were not as rich as they thought. You’re my husband and I know you even in the dark.”

ALSO SEE: In the Name of Tradition: Regina Chukwu Recounts How Her Infant Daughter Was Snatched By Late Husband’s Family