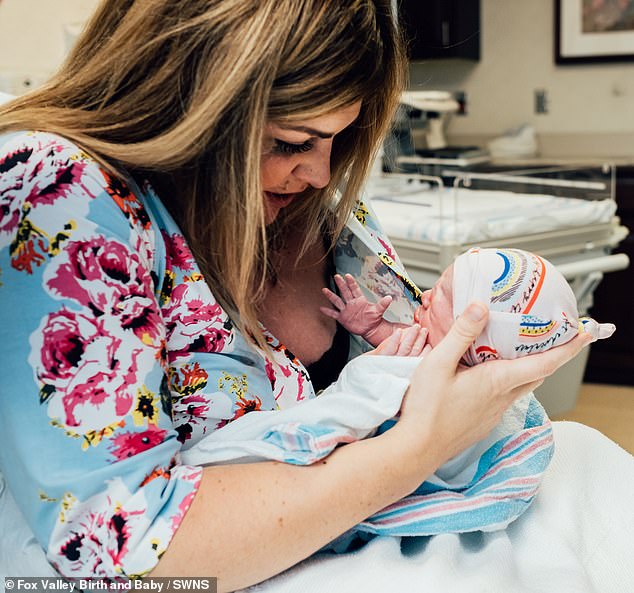 Erin Boelhower, 33, from Woodstock, Illinois, endured 9 IVF transfers and more than 600 injections over the course of 3 years trying to get pregnant with husband, Matthew, 33.

Erin and Matthew were left devastated after suffering a string of miscarriages, but never lost hope that they would one day become parents. 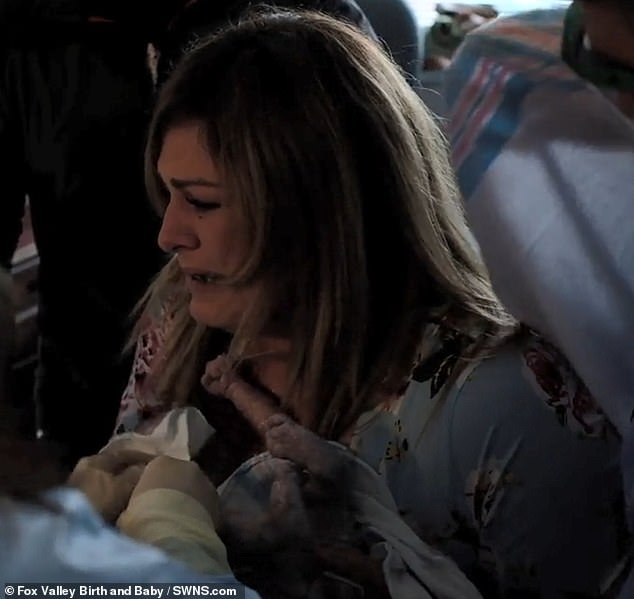 READ ALSO:Fertility Journey of Matthew &#038; Amelia Wright, After 8-Years Of IVF Will Inspire You Not to Give Up

Their dream finally became a reality when Erin’s best friend, Rachel Checolinski, 34, gave them the gift of a lifetime and offered to be their surrogate.

In January, 2 of Erin’s embryos were transferred to Rachel’s uterus. That same month, a test revealed she was pregnant.

The pals spent the next 9 months side by side and Erin was at the hospital with Rachel when she went into labour with baby Scottie on September 19.

“I have no clue how I lived this long without Scottie, I will never forget everything that we went through to get her here and she was definitely worth it all.” Erin said.

Rachel, a full-time mom from Fond Du Lac, Wisconsin, met Erin in 2008 when they worked at an airport together.

“I feel like the lucky one, I’m so grateful Erin allowed me to be her surrogate”, Rachel said. 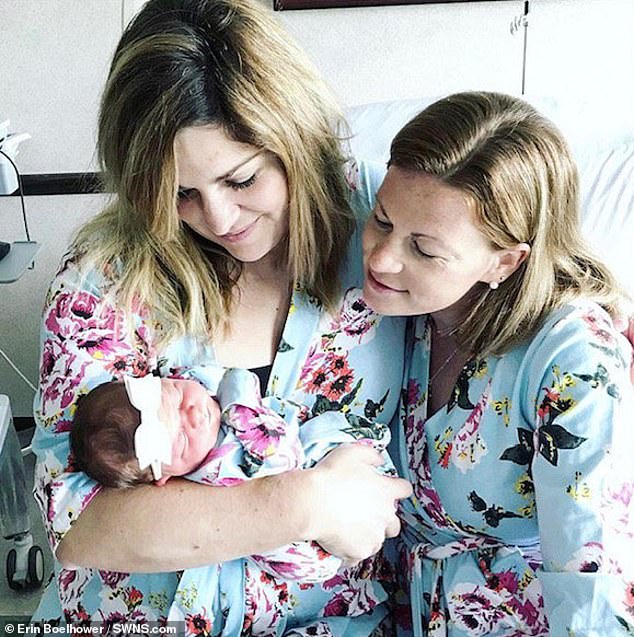 Erin and Matthew got married in October 2012, and desired to start a family immediately. After a year of trying, it was discovered that Erin’s left Fallopian tube was infected and needed to be removed, making it very difficult for her to conceive naturally.

After surgery, she was diagnosed with polycystic ovarian syndrome (PCOS) and hypothyroidism. The couple then began intrauterine insemination (IUI)- a fertility treatment where sperm is placed inside a woman’s uterus.

“This would be the beginning of our hundreds of injections and I was terrified of needles. When we first started these treatments, I would go to Matt’s work every night for him to inject me with the hormones — that’s how scared of injections I was. Matt and I tried 3 IUIs with no luck. None of them with even the slightest speck of that 2nd line on a pregnancy test.” 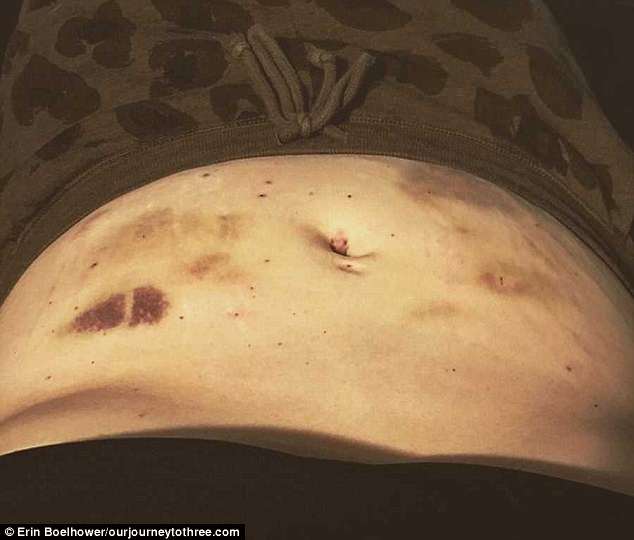 In November 2014, Erin and Matthew began their 1st cycle of IVF, and on Thanksgiving of that year, Erin discovered she was pregnant for the 1st time. However, she miscarried the baby on her 30th birthday.

“It’s heartbreaking. You do IVF and then it works. But you never think a miscarriage will happen to you. You are not only disappointed in yourself, but you feel bad because you are not giving your husband the baby he dreamed of, or your mother the grandchild she dreamed of.”

Erin’s best friend, Rachel- mom-of-3: Amarach, 13, Cillian, 5, and Teagan, 3, was beside her every step of the way. After Erin’s 4th miscarriage, Rachel volunteered to be her surrogate. 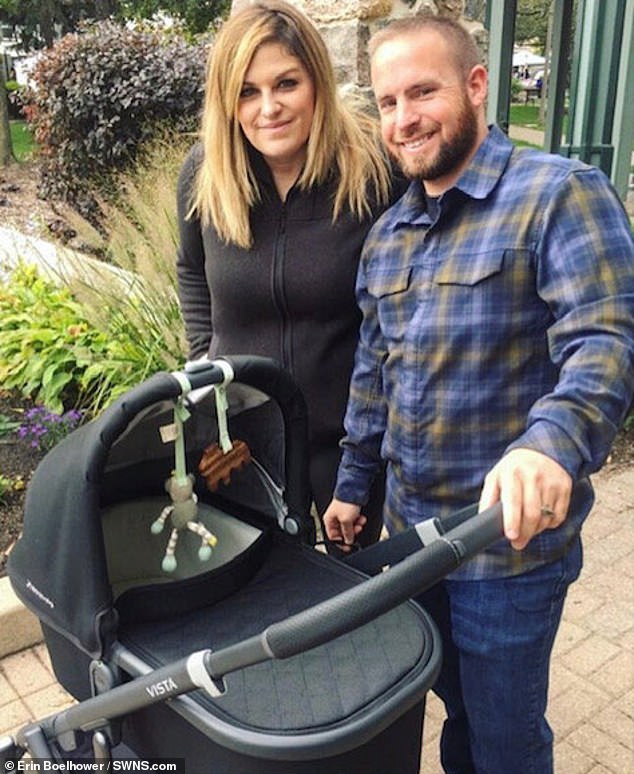 For Erin and Matthew, with each new cycle, new hope was found only to be followed by fear, devastation, and heartbreak. They saw different doctors, tried different protocols, anything for them to reach their dream of becoming parents. Erin said, “We became the living definition of insanity — doing the same thing over and over again and expecting different results. And it was exhausting.”

“I wrote on Instagram about how I was reaching my breaking point and she sent me a message. What if a friend is your surrogate? It was such a generous offer. I couldn’t get my head around it.”

Rachel’s own difficulties conceiving her 2nd child with her 34-year-old pilot husband, Dan had convinced her that she should be a surrogate for Erin.

What Couples Battling Infertility Need To Know About Surrogacy

“I struggled for 2 years to conceive Cillian so I knew the pain of wanting something really badly and not being able to fulfill that dream. I had been there through all of Erin’s infertility treatments, I cried with her when she lost each one of her babies. I would say to her: ‘I wish there’s something I could do.’ I was in the shower one day, praying for her, and suddenly the answer came. I could be her surrogate!”

It was only when Erin suffered her 6th miscarriage in June 2017, that she accepted Rachel’s offer.

Erin and Matthew raised $40,000 to cover the costs of the surrogacy agency, fertility clinic, legal fees, and Rachel’s medical bills.

In January 2018, Rachel took a pregnancy test and discovered she was pregnant with Erin’s baby.

“I knew I was carrying and having a baby that wasn’t mine. I was most excited about seeing my best friend become a mom and holding the baby she had always wanted.” 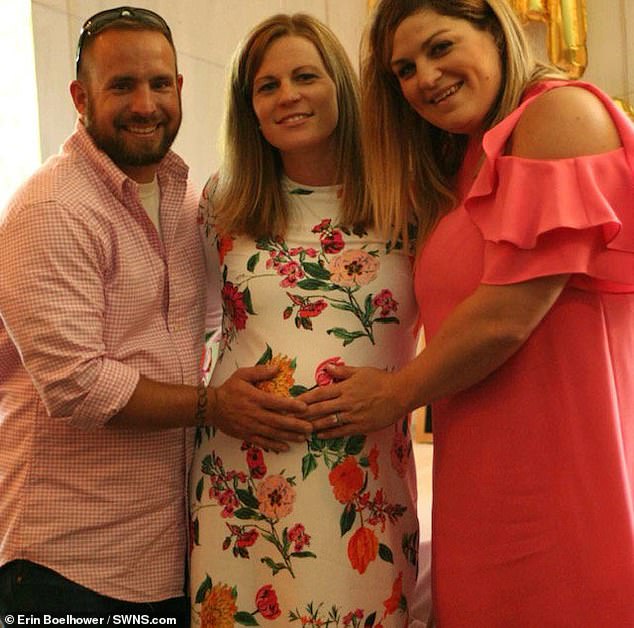 The couple spent several thousand dollars on treatment and although surrogates usually cost in the region of $50,000 and upwards, by Rachel offering to carry Erin and Matt’s child, the couple could save on the gestational carrier fee.

And on January 12, 2018; the couple transferred two embryos into Rachel and on January 21, it was confirmed that Rachel was pregnant with one baby and the couple later found out that they were having a girl.

And on September 19, Rachel gave birth to Scottie, who weighed 6 pounds 8 ounces, at Aurora Health Centre in Oshkosh, Wisconsin.

“What made it even more special was that Scottie was born on my late father ,Scott’s birthday. He passed away from stomach cancer in 2015. It was very hard for me to watch Rachel screaming in pain during the labour and knowing it was all for me. Rachel is one of Scottie’s godmothers. She is pumping for Scottie now so that she grows up on breast milk. I want Scottie to know how big a role Rachel has played in her life. It’s an unbreakable bond.”