Is Your Child Showing Reluctance to Learn? See 7 Ways to Change That (Part One)

A Nigerian father who goes by the name Rhyda Molenu on Facebook, shared photos of himself having a shisha smoking weekend with his little sons.

Molenu came under major attack as many Facebook users called him an ”irresponsible father” hurling insults at him after posting the disturbing photo with caption below.

”HAPPY WEEKEND WITH MY BOYS. SHISHA OYA. NO FAKE LIFE.” 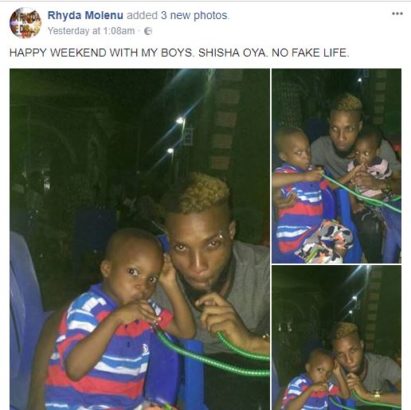 READ ALSO: OUTRAGE as Images of Young Boy Proudly Smoking Shisha Goes Viral | You Will Be Shocked How a Nigerian Man Reacted to the Images

After being slammed, the he shared another photo saying people should mind their business as he is not living a fake life with his kids.

Defending his action after being slammed, he said he is preparing his boys to face the real world which in his own opinion is the ‘street’.

”Many of you that Smoke like mad men and mad boys today. Your fathers did not give you SHISHA when you are young, so keep shot.

NO BODY HOLY PASS. LOOK IN TO MY EYES AND TELL ME SAY YOU PASS. PRETENDERS DO THE WORST. NO FAKE LIFE WITH MY KIDS.

BOYS LET THEM TALK A PREPARE TO FACE THE STREET NO MATTER WHAT YOU SEE.
THAT IS MY WAY DO YOUR OWN. IF AM NOT A GOOD FATHER LEAVE IT ONLY GOD KNOWS WHO GO MAKE AM IN LIFE. BUT I BELIEVE MY BOYS THIRE HEAD IS THERE. EVERY WHERE GOOD. TALK MORE MY POST NOW IS EVERY WHERE. HAHAHA.” 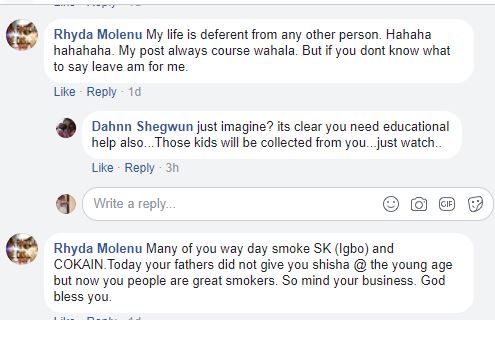 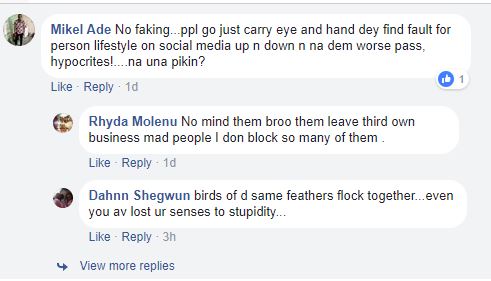 ”No one is against you, and BTW your post is everywhere for the wrong reasons… A lot of negative talks about you training your innocent kids on how to take nicotine.

Even you smoking the shisha, you do not even know what its made of….Groom your kids in the way of GOD and make the world a better place.

If your parents taught you how to smoke shisha or cigarette @ the same age you are teaching your kids, am sure by now your story would have ended.

Take correction, train them well..make them grow up and be better than you…because at the end of the day if they become problem to the society (GODFORBID), they will also become a bigger problem to you as they will come after you for ruining their lives…peace be unto you.”

There are varying beliefs about whether or not shisha is harmful to one’s health.

#Justiceforsylvester: Dowen College Sealed By Government As Sylvester Oromoni’s Dad Makes 4 Demands, Vows Not To Bury Him Until They Are Met

Well, here is what British Heart Foundation has to say about shisha:

”Shisha pipes use tobacco sweetened with fruit or molasses sugar, which makes the smoke more aromatic than cigarette smoke.

Popular flavourings include apple, plum, coconut, mango, mint, strawberry and cola. Wood, coal, or charcoal is burned in the shisha pipe to heat the tobacco and create the smoke because the fruit syrup or sugar makes the tobacco damp.

When you smoke shisha, you and anyone sitting near you are breathing in smoke which releases  toxins including carbon monoxide and heavy metals –reducing your body’s ability to carry oxygen around in your blood.

Traditionally shisha tobacco contains cigarette tobacco, so like cigarettes it contains nicotine, tar, carbon monoxide and heavy metals, such as arsenic and lead.

As a result, shisha smokers are at risk of the same kinds of diseases as cigarette smokers, such as heart disease, cancer, respiratory disease and problems during pregnancy.

The average shisha-smoking session lasts an hour and research has shown that in this time you can inhale the same amount of smoke as from more than 100 cigarettes.

Some people mistakenly think that shisha smoking is not addictive because the water used in the pipe can absorb nicotine. In reality, because only some of the nicotine is absorbed by the water, shisha smokers are still exposed to enough nicotine to cause an addiction.”